Punishment adequate for failing to vote with Government on Bill, Green leader says 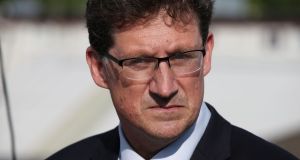 Green Party leader Eamon Ryan has said his decision to remove the speaking rights of a party TD and Minister of State was “sufficient” punishment after they failed to vote with the Government on a new tenant’s rights Bill.

Although Taoiseach Micheál Martin would not be drawn on whether he believed the sanctions were appropriate in their strength, Mr Ryan said he believed it was enough.

The Green Party decided to sanction Minister of State Joe O’Brien and Dublin TD Neasa Hourigan, who resigned as party whip on Thursday, for voting against the Government and abstaining.

“Both have had their speaking rights removed for two months,” the party said in a statement.

Mr Ryan confirmed on Friday the suspension would include the six weeks of the Dáil recess, meaning the TDs’ speaking rights would only be lost for two weeks.

He said he believed the sanction was sufficient.

He said he was “hopeful” and “confident” that message had been understood. “I’ll be honest we’re looking forward for two weeks’ holidays. It has been a difficult six months for everyone,” he said, adding that he was also confident his party would continue to work with its coalition partners.

Mr Martin confirmed he had spoken to Mr Ryan and Tánaiste Leo Varadkar about the issue on Thursday night but that disciplinary matters were a matter for each individual party.

“Every party has its own internal disciplinary procedures,” he said. “Eamon Ryan spoke to me last evening, and to Leo Varadkar as well, and we are progressing the programme for government and its policy priorities.” He said he was not “fazed” by the developments.

Minister for Finance Paschal Donohoe also said the first few weeks of government “could have gone better” but he was also confident about the future of the Coalition.

“I am very confident about the prospects of this government. It is true to say over the last number of weeks we have had well-documented difficulties.

“It is true to say after a very lengthy process of putting together a government, which was in itself demanding as we have colleagues taking up really important jobs, there have been things over the last number of weeks that we do acknowledge could have gone better and could have been handled differently,” he said.

“But if I look at the way we are working together, if I look at the relations that are in place between the three parties, this will be a government that will be bigger than the sum of its individual parts.”