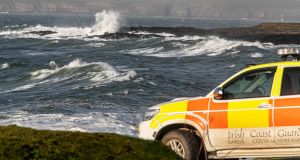 Naval divers are to join the search for 41-year-old fisherman Willie Whelan who was on board the Alize trawler which sank off the coast of Hook Head in Co Wexford on Saturday evening.

It is understood that two brothers of Mr Whelan, who are also fisherman, are involved in the recovery operation.

Whelan, from Fethard on Sea, has been described by friends and fellow fisherman as a friendly man who was always willing to help others. He got married last year.

The Naval Service was on Tuesday providing assistance to the search operation with the LE Samuel Beckett taking over duties from the LE Ciara.

Inclement weather on the south east coast and a yellow wind warning delayed the resumption of the search on Tuesday morning with winds being too high this afternoon to facilitate the use of the R117 rescue helicopter.

Neville Murphy, a spokesman for the RNLI branch, said the safety of crews is paramount now that the operation has been categorised as a recovery.

“We won’t send them out when it is unsafe,” Mr Murphy told Newstalk Breakfast.

Mr Murphy said RNLI crews operate all weather boats and crews are willing to go out to sea, but that in recovery situations the safety of crews was important.

A second fisherman who died in the tragedy Joe Sinnott (65) from Kilmore, Co Wexford will be laid to rest ton Wednesday following noon mass at St Mary’s Church in the town.

The father of four was winched from the sea but passed away a short time later in University Hospital Waterford.

It is understood the trawler sank with such speed that its crew were unable to to raise the alarm. The radio beacon alerted the emergency services to the tragedy that was unfolding shortly after 10.30pm on Saturday.

The Coast Guard has thanked the statutory and voluntary bodies, including Naval Service, RNLI and local fishing vessels, that have participated in the search since the weekend.

The operation is now categorised as a Search and Recovery operation. The Coast Guard will continue to support an Garda Síochána and the Marine Casualty Investigation Board (MCIB) with the ongoing search and investigation.

The fishermen had been fishing for scallops six miles off Hook Head when the trawler sank.

The cause of the sinking is unknown at thisstage. The trawler was said to have been in pristine condition and was well maintained.