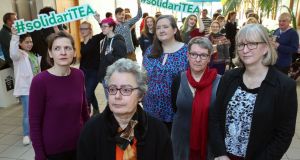 Up to 300 staff and students attended the SolidariTEA support event for four academics pursuing legal action over lack of promotion at NUI Galway. Photograph: Joe O’Shaughnessy

The chair of NUI Galway women’s staff network has called on the outgoing university president to resolve the situation of four academics taking legal action over lack of promotion.

Dr Rachel Hilliard said NUIG president Dr Jim Browne “still has time” to address the issue before he leaves his post at the end of this year.

Dr Hilliard was commenting at a solidarity event for the four female academics which was organised by staff and students on the college campus on Thursday.

A fifth colleague, Dr Elizabeth Tilley, who pursued her case through the Labour Court, was promoted this autumn after an agreement had been reached with the university.

“The disputed promotional round has been described by the Equality Tribunal as ‘shambolic’ and discriminatory in its effect. Despite this, the case taken by the four against the university has not been resolved and continues to make its way through the courts,” the NUIG women’s network said.

Dr Hilliard said the situation of the four women “affects us all”, and also affected the international reputation of the university.

“The culture of the university will not change until this issue is resolved, and I would hate to see this as a defining aspect of Prof Browne’s presidency when there is still time to take action,”she said.

NUIG said “the university would like to see the proceedings resolved and entered formal mediation on that basis. The matter is now before the courts who will determine if there is any basis to the claims made by the four lecturers”.

NUIG societies chair Ruth Sweeney and NUIG students’ union equality officer Clare Austick said that many students were not aware of the situation as it dated back three years.

“It is a measure of the concern felt by those students who are aware of it that they attended this event during exams,”they said.

The NUIG university women’s network represents both academic and administrative staff, and the event was also hosted by GenderArc, FemSoc and the NUIG students’ union.