Olivia Kelly reports on the challenges and dangers facing cyclists in Dublin as the new Luas Cross city line opens this weekend. It sees the extension of the Luas Green Line and the creation of an interchange with the Red Line. Video: Bryan O'Brien 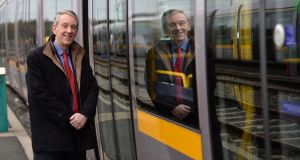 Ireland is “unique” in the way it has highlighted concerns by cyclists as the Luas Cross City is rolled out in Dublin, according to the tram operator’s managing director who says similar issues are not as prevalent in other countries.

Narrow gaps in the tramlines have become of particular concern as the upgraded rail service now criss-crosses the capital, bisecting some of the busiest parts of the city.

But while cyclists discuss near misses and even injuries, Peter Lunden-Welden, head of Transdev, says the debate has left him somewhat surprised, particularly given the Luas’s potential to reduce inner-city traffic.

“When you come to [the question of] bicycles ...most cities I have been involved [with] that’s not in a discussion. It is more, you know, the relationship between cars and trams,” he said, ahead of next Saturday’s Cross City launch.

“I was quite surprised finding that this is a main issue.”

Lunden-Welden is well placed to make this observation. His role at the centre of major transport projects has brought him around the world, including an initial posting in Dublin in 2004 when the Luas made its first tentative reach from the centre into suburbia.

Most recently he was chief executive of the Seoul Line 9 Operation in South Korea, a piece of infrastructure that dwarfs Dublin’s tram system. The subway accommodates about four billion customer journeys per year. Trains arrive every two minutes, bringing 2,500 people around the metropolis.

As well as Dublin, Lunden-Welden oversaw the laying of new tramways in Barcelona and Stockholm in his native Sweden, where safety issues and public awareness campaigns were part of easing the public into familiarity.

He is certainly not dismissive of the concerns of cyclists – rather his holistic view of city transportation networks focuses on the benefit of reducing traffic, a byproduct he considers of greater value to cyclists.

There is still the need, however, for the kind of safety campaigns he has implemented as part of tram launches.

“I see a lot of people walking in the city centre, crossing the street and they have their headphones. That’s the problem for a car, for a tram, for a bus, that even if they drive very slowly they can’t rely on people because of these headphones,” he says.

Dublin has come a long way since Lunden-Welden arrived here 14 years ago. Compared to then, he says, there is more “close cooperation” in developing public transport.

Trams in 2004 were regarded as “hate objects” for many people put off by construction works, and the eventual outcome – a “marvellous” service – was not clear at the time. This service, he believes, is on the eve of a major leap forward.

Even though Dublin came slightly late to the tram revolution compared to other European capitals, he believes the decision taken in the 1990s was an “historic, wise” one, and the completion of the Cross City will help broaden the horizon of possibility for commuters.

As the city continues its targeting of “through traffic”, the Luas head believes the concept of removing cars from cities is “a good idea and you should do it”, although he qualifies that by including taxis as part of the public transport ecosystem.

He points to the successful changes to the city’s north quays as part of the Cross City works; something that has improved travel times for buses and can only benefit the experience of commuters.

The availability and visibility of successful transport planning is central to convincing motorists to switch, and Lunden-Welden fondly recalls the transformation of the Naas Road when the original red line first opened.

“The tram goes down there at 70kph and the cars were queuing,” he remembers. “[Since then] we have had to extend our park-and-ride here in Red Cow a lot of times because [now] more and more people use the car from outside to the Red Cow and park the car here. They saw the trams.”