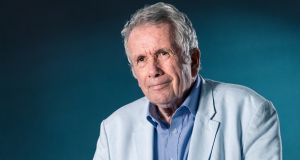 Martin Bell said the advent of the internet meant foreign news was being downgraded because it was “not a ratings winner”. Photograph: Roberto Ricciuti/Getty

With the world living through the most dangerous time since the Cuban missile crisis, now is “no time for soft news, the fluff and forth of journalism crafted to entertain rather than to inform,” former BBC foreign correspondent Martin Bell has said.

Mr Bell said he worried about the “celebrification of the news agenda”and maintained that serious stories were being crowded out in the chase for audiences.

The former MP made the comments at the Dublin Festival of History where he spoke about his new book War and the Death of News in a public interview with RTÉ journalist Keelin Shanley.

In it he argues that the world is living through the most dangerous time since the 1962 crisis with a “wild card” American president, global jihadism, nuclear proliferation and climate change.

Mr Bell said the advent of the internet meant foreign news was being downgraded because it was “not a ratings winner”.

Editors were able to see the stories that attracted the most eyeballs and the one’s that did not. As foreign news is expensive, it is no longer covered in the same way, he said.

“This myopia would be dangerous at anytime. It is especially so in a world as turbulent and independent as ours is.”

“We need newspapers, we need reliable television and radio news services who can be held to account for the mistakes they made,” he said.

“Media needs to heed the wisdom of the writer and sailor Joseph Conrad - the only way to survive the typhoon is to turn and face it.”

He noted that the New York Times has had a surge in subscribers since Donald Trump took office.

Mr Bell described The Irish Times as “one of the great pillars and exemplars of journalism in Europe”.

However, he took exception to a story on the newspaper’s website on Friday about Kim Kardashian.

In it Kardashian revealed that she had received an apology letter from the man who alleged orchestrated a burglary in France in which she was bound, gagged and robbed.

Speaking about the Iraq War, Mr Bell excoriated the Tony Blair government. He said none of the MPs who voted to support the war had ever been in combat.

By contrast, the members of the British governments who kept the country out of the Vietnam War had seen service in the second World War. He instanced the Ted Heath Government formed in 1970 in which every member had served with the exception of Margaret Thatcher.

He said politicians who experienced the horrors of war were much less likely to use it as a policy.