Not in my front yard: How to make the new bus plan work 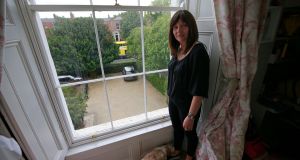 Maggie O’Neill, who lives on Terenure Road East, and is concerned about the ramifications of the bus corridor. Photograph: Nick Bradshaw

It’s 8am on Wednesday and about 20 commuters are queuing up on Swords Main Street to get on a bus into Dublin city centre for work. They are waiting for the Swords Express, a private bus service that runs from the north Co Dublin area to the city. Only two people are waiting at the Dublin Bus stop to travel in the same direction.

Róisín Dixon works in the financial services sector and each morning takes the private bus, which saves time by running through the Port Tunnel. “In the mornings it’s fairly frequent, normally it probably takes about 40 minutes. I’d never get on [Dublin Bus]. You’d never get in on time,” she says.

Kim McKeen, another Swords resident who commutes in to the city, says using Dublin Bus is the “very last option” travelling into work. “If I miss the Express, depending on the time, I’d probably get a taxi,” she said. The early-morning commute would be a “nightmare” without the private provider, she said.

It’s long journeys such as these – and perceptions such as these – that the National Transport Authority’s €2 billion plan Bus Connects aims to address. The route from Swords to the city centre is one of 16 earmarked for streamlined bus corridors. By widened roads to accommodate two bus lanes, separate cycle lanes, and a general traffic lane in each direction, Dublin Bus would cut the journey from Swords from 70 minutes to 40.

Several of the planned bus corridors will halve journey times from congested commuting points on the outskirts of the city, which currently can take more than an hour. Under the plan, a bus from Blanchardstown to the city centre is projected to take 30 rather than 65 minutes; Tallaght to the city would be reduced from 80 to 40 minutes, it predicts.

The other main routes to the city will run from Rathfarnham, Clongriffin, Ballymun, Lucan, Ringsend, Kimmage and Bray.

The 10-year transport project has the potential to “transform” Dublin, according to Tom Dunne, head of the school of surveying and construction management at Dublin Institute of Technology.

“Dublin is certainly a low-density city, and buses are the most cost-effective means of transport for low-density,” he says. “It will make the city easier to navigate, and draw the city together,” he said.

The main point of controversy with the plan is the need for about 1,300 homeowners to lose parts of their front gardens along the route, via compulsory purchase order if necessary, to widen narrow roads.

The NTA expects to announce which homes will be directly affected by October.

The first reaction of residents potentially affected by major transport projects is naturally to “fear the worst”, says Dunne. “But the delivered model is in most cases better than those people expect it to be,” and while property prices of homes affected may dip due to a fear factor, they tend to bounce back up after people see the finished project, he said.

Maggie O’Neill lives on Terenure Road East, in a large home with a well-kept, long front garden, with her husband and four children. The road, made up of mostly affluent homes, is on the proposed Rathfarnham-city centre route.

O’Neill says she would be “very upset” if part of her garden had to make way for the expanded bus and cycling corridor. “I would be resistant. It’s a lovely bright road with trees. You just don’t want it turned into one of these awful commuter lanes,” she said.

The NTA has said it will replant mature trees if others are removed, and landscape gardens that are cut back by the project, as well as providing financial compensation to homeowners. But O’Neill says “no amount of compensation would do, your garden is your garden”.

While most political parties have rowed in to support the infrastructure plan, some politicians in areas potentially disrupted were quick to comment on the plan on Tuesday.

Fine Gael Dublin North-West TD Noel Rock criticised the lack of information about which homes would potentially lose parts of their garden or parking spaces. The NTA was in no man’s land, “giving some detail, but not the full details”, he said.

“There’s always going to be a price in terms of making progress with big projects,” he said, but added the NTA’s approach had allowed a “fear to develop” across entire areas along the routes.

The success or failure of the project may well depend on how the NTA deal with the “not in my front yard” sentiment.

The transport authority will need to put in a lot of groundwork allaying fears among residents who are set to lose parts of their front gardens or parking spaces, says Dr Paula Russell, associate professor of architecture, planning and environmental policy at University College Dublin.

Disrupted communities will need to get a “give back”, or quid pro quo such as local amenities, to encourage them to buy into the project, she said. “If we want to just have business as usual, it will quickly be gridlock. We have to make hard decisions around direct investment in public transport,” Dr Russell says.

A second phase of the project would potentially see three or four “orbital” routes circle the city centre, cutting across and connecting the initial corridors. Dr Russell says this phase, which does not have a defined time frame, would complete the jigsaw in joining up a comprehensive rapid bus network across Dublin.

Graeme McQueen, head of public affairs at Dublin Chamber of Commerce, says the Bus Connects investment would be a big step in tackling the current “congestion mess”.

At the moment there is “very little slack” in the transport infrastructure, he said. “If something happens on a given day, such as a bus crash or problem with the Dart line, it spirals outwards and quickly the rest of the city gets slowed down,” he said.

Businesses welcome the ambition to get public transport commute times down to half an hour from the growing belt of residential areas along the M50, and “open up the arteries” into the city centre, McQueen said. The knock-on effects of cutting commute times will be “a shot in the arm” for the quality of life of those living in Dublin, he said.

The winners from the plan would be those satellite areas outside the inner Dublin suburbs, such as Blanchardstown, Tallaght and Swords, where public transport has struggled to keep pace with growing populations.

Paul Reid, chief executive of Fingal County Council, said the scheme would “unlock” access to the city for big areas of north and west Dublin.

“Dublin is key to growing the national economy, and Fingal is key to growing Dublin. We have the land, we have the space,” Reid says. But he emphasises the need for “follow through”, to make sure the project moves from plans on paper, to shovels in the ground.

The north Dublin Metro, another big project linking Swords, Dublin Airport, and the city centre, has been shelved several times since it was first touted in 2005. The project is on the table again under the Metro Link plan, to be built by 2027.

Apart from cutting journey times from the commuter belt, several suburbs currently poorly served would also benefit from the proposed bus corridors. Bus journeys from Rathfarnham, south Dublin, into the city centre currently take up to an hour and 15 minutes, and a rapid corridor would cut that to 25 minutes, the NTA estimates.

Deirdre Kelly, a Rathfarnham resident, was waiting for the No 16 bus into the city on Wednesday afternoon. At the moment she would travel into the city centre only five or six times a year, to meet friends or for the sales, she said.

She only ever takes the bus during the afternoon and off-peak times and rarely has a problem with the service, she says. “I don’t commute in the morning; you have a different story for people in the morning. I hear people saying it’s jam-packed.”

Kelly does most of her shopping in nearby Dundrum , but said she “probably would” travel into the city centre more if the new bus route came to pass.

The proposals for segregated cycling lanes along the bus corridors have the potential to “revolutionise” cycling in the city, Colm Ryder of the Dublin Cycling Campaign says.

“Having segregated and safe cycling tracks will make a huge difference for the city. It will open up cycling for a lot of people who don’t like cycling with traffic, or people cycling to work”, he says.

The planned investment in cycling, often at the bottom of the transport budgetary pile, is a potential game changer Ryder says, adding that most enthusiasts were “fully behind it”.