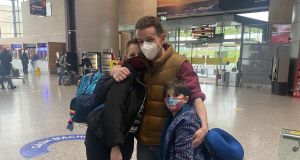 A young Irish man who was apart from his American fiancee for a year because of the Covid-19 pandemic admitted he was tempted to climb over the barrier and through the glass doors at Cork Airport as he couldn’t contain his excitement in the arrivals hall for a second longer.

Bernard McSweeney of Ovens, Co Cork, has spent €1,000 on Covid-19 tests for himself and his family members in order to be safely reunited with his fiancee, Stephanie Kyle, and her nine-year-old daughter Daisy.

Mother and daughter flew from Phoenix, Arizona, to Detroit in Michigan and then onwards to Amsterdam. The last leg of their journey brought them to Cork Airport.

McSweeney said it was love at first sight when he met Stephanie in a social hall in Mesa in Arizona in September 2018.

“The rest is history. This [the pandemic] tested us a lot. But I have to say that I knew from the very first date that this was it.

“I was over there working when we met. I was semi-professional in motorsport for navigating and rallying. I was also working with a specialist garage.

“I am just so delighted that they have finally made it here. I am relieved she didn’t fly from England.

“Me and my family have all gone for Covid tests over the last few days. My mother has chatted to Stephanie on the phone but they have never met. It is unbelievably exciting.

“Everything we have been through will be worth it. Nothing matters only being together.”

McSweeney, who had given up smoking, said he had broken down that morning and bought a pack of cigarettes as his stomach was full of butterflies about the day ahead.

He said they would be keeping their circle small because of Covid-19. He said once the “cabbage and spuds and traditional Irish dinner” was on the table everybody would be happy.

McSweeney was one of just five people in an empty arrivals hall at an airport that has suffered hugely arising out of Covid.

He asaid that he and Kyle had found it really tough to be apart for so long relying only on Zoom and regular telephone calls to stay in touch.

He praised his friends and family for their support. At times he felt really despondent about when he would ever see the love of his life again.

“I have been on the phone to my friends at two and three in the morning. It has been hard. It has been extremely difficult at times.

“I am so looking forward to the family Christmas. I like the idea of this story getting in the paper because it is giving people a bit of cheer. Which is badly needed this year.”

The couple hope to marry in 2021. However, with the pandemic the ceremony could well take place in 2022.

McSweeney joked that the relationship was being sorely tested by the lengthy immigration process for the US which has cost in excess of €8,000 to date.

“We are looking in to her moving over here and also trying to sort the visa for me to go there. I have one of the best immigration lawyers and they are going through it with a fine-tooth comb. I had to prove I have enough in savings. She had to prove she earns enough to cover me. I have to have a full checkable 15-year history. One form was 18 pages. There is always one more form needed.”

McSweeney, Kyle and Daisy embraced when they finally made it through the arrivals hall to the all but deserted airport which only has one flight a day between now and Christmas.

McSweeney said they were “on air” as they left the airport to make the short journey to Ovens.

“This was our third time this year trying to reunite. We had Patrick’s Day, then July and now finally this. This is so special. It means everything to be together for the next two weeks.”