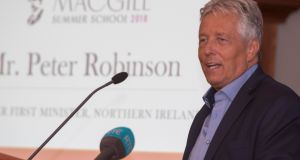 Former NI first minister Peter Robinson told the MacGill Summer School in Glenties that the Republic’s relationship with the North will never be the same again after Brexit. Photograph: North West Nespix

Former Northern Ireland first minister Peter Robinson believes the North should prepare for the possibility of a united Ireland.

Speaking at the MacGill Summer School in Glenties, Co Donegal, Mr Robinson said he does not think Northern Ireland will want to leave the UK but that is no reason it shouldn’t prepare for the eventuality.

“I don’t expect my own house to burn down but I still insure it because it could happen,” he said.

The former leader of the Democratic Unionist Party (DUP) said he would accept the results of a border poll which led to Northern Ireland joining the Republic.

“As soon as that decision is taken every democrat will have to accept that decision,” he said in response to a question from the audience.

He said walking towards that scenario without preparation is madness and compared it to the decision to leave the EU.

“I don’t believe Northern Ireland will want to leave the United Kingdom, but if it does happen we would be in a terrible fix because we would be in the same situation as leaving the EU where nothing was negotiated or decided about what was going to happen after.”

Mr Robinson said he believed the unionist community in general would also accept the results of a border poll on unification but would want some “protections”, as the Nationalist community currently enjoys in the North.

On the subject of Brexit, Mr Robinson said the Republic’s relationship with the North and with the UK mainland will never be the same again. He warned these relationships could become “toxic” if “the Northern Ireland Assembly, its Executive, along with the north-south and east-west institutions” are not restored.

“Without each and all of those parts being in place, and working, relationships will suffer – perhaps drastically.”

He warned the east-west relationship between the UK and the Republic “will struggle to maintain anything close to the warmth of their pre-Brexit affinity” no matter what deal is made.

“At worst that relationship may become stony and staid and, in extreme circumstances, even perfunctory and fruitless.”

He said he believes UK Government ministers see the Irish Government as “rigid if not antagonistic” and that this has “planted the seeds of regression in the relationship between the two countries.

“Do not be fooled by diplomatic, understated Whitehall-speak. They are not happy with Dublin.”

Mr Robinson said the Irish Government’s approach to Brexit has also been poorly received by the unionist community in Northern Ireland.

“From a unionist perspective, it need only be stated to be accepted that there has been a rapid deterioration in their estimation of the Irish Government.

“Unionists believe Dublin has been completely self-serving and unnecessarily bellicose during this process. I believe the absence of a working north-south institution has exacerbated the situation.”

He continued: “Moreover, there is a feeling that at no point has there been any consideration of the effect and force of their words and actions upon the unionist population.”

Asked by an audience member about the Renewable Heating Initiative (RHI) scandal, which led to the collapse of the Stormont Assembly, Mr Robinson said ministers must take many decisions every day.

“I suspect that if any government decision, anywhere in the world, was put under the kind of scrutiny that the RHI decision is having, politicians anywhere might not come out too well.”

He said there is no reason Stormont cannot get back on track while issues like the RHI and the Irish Language Act are dealt with in parallel and on a strict timeline.

Asked about his DUP colleague Ian Paisley Junior, who has been suspended from Westminster for failing to declare two trips to Sri Lanka that were paid for by its government who we was lobbying for at the time, Mr Robinson said “the least I say about that matter the better”.

“The House of Commons has investigated, he’s put his hands up, he’s recognised he did wrong, he’s apologised for it, and the party, through its own internal structure, will have its decision to take.”