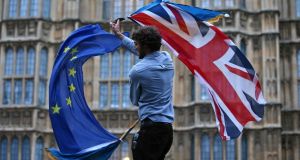 The DUP’s eight MPs have said they will vote against the deal when it is debated in the House of Commons on Wednesday. File photograph: Justin Tallis / AFP via Getty Images

The speaker of the North’s Assembly is to be asked to recall MLAs from Christmas recess to debate the post-Brexit trade deal agreed between the EU and the UK.

The First and Deputy First Ministers agreed to write to the speaker, Alex Maskey, after ministers met on Monday to discuss the deal for the first time since it was reached on Christmas Eve.

The Sinn Féin whip, the MLA John O’Dowd, had proposed the recall, saying it was important the Assembly meet to debate the deal and to “reaffirm our opposition to Brexit and to reiterate our call for the full implementation of the withdrawal agreement and Irish [Northern Ireland] protocol”.

The debate is expected to take place on Wednesday.

The North’s Minister for Finance, the Sinn Féin MLA Conor Murphy, said on Monday that MLAs should “have a chance to discuss the agreement that has been reached, the implications for here, to reaffirm our opposition – because the majority of the MLAs in Assembly oppose leaving the European Union, we were taken out against our democratic wishes – and to ensure that the protocol, which is the limited protection that we have against the worst excesses of Brexit, is faithfully implemented to at least offset some of the damage”.

Meanwhile, the DUP’s eight MPs have said they will vote against the deal when it is debated in the House of Commons on Wednesday.

The DUP and other unionist parties are opposed to the Northern Ireland protocol because it creates a border in the Irish Sea. Pro-Remain parties – which include Sinn Féin, the SDLP and Alliance – continue to oppose Brexit and characterised the deal last week as a relief rather than a cause for celebration.

In a statement issued on Monday evening, the DUP said it had considered the broad aspects of the deal, and had concluded that it “does not assist Northern Ireland in the context of having to operate under the Northern Ireland Protocol”.

For this reason, the party said, its MPs would vote against it “as a point of principle and not because we supported a no deal option”.

“Whilst recognising this agreement brings about tariff and quota free trade between the UK and the EU and thus reducing the impact on the GB to NI trade flows,” DUP leader Arlene Foster said, “we still have many negative issues arising from the protocol.

“On that basis we will vote against this agreement. We will continue to work to mitigate the worst excesses of the separate Northern Ireland arrangements whilst exploring new opportunities for Northern Ireland,” she said.

The outcome of the vote is not in doubt, but the DUP MP Sammy Wilson told the BBC on Monday that this was no reason for the party not to “articulate concerns people in Northern Ireland have about the deal”.

“Many things have been left unaddressed and kicked down the road... we’ll be saying to the government that these are still issues which we believe are resolvable,” he said.

“We expect you [the government] to fulfil promises you’ve made to the people of Northern Ireland but you haven’t done it to date, so don’t expect our support.”

Meanwhile, for the first time in more than 20 years people travelling to the State from British ports and airports will be able to load their luggage or their cars with tax-free tobacco, alcohol, perfumes and so-called luxury items once the new year bells chime in less than a week.

Duty-free between Ireland and Britain was abolished 21 years ago as it was not considered compatible with the emerging single market. However with the UK now leaving the EU and its single market from the start of next year the old rules are set to revert.

The new duty-free rules will not, however, apply to people travelling between Northern Ireland and the Republic.

While duty free sales for passengers travelling within the EU were abolished in the late 1990s, they remained for all non-EU destinations.