No more flying your drone over military bases from Monday 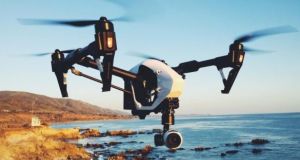 All flying drones over 1kg must be registered with the Irish Aviation Authority (IAA) from Monday.

Ireland is one of the first countries in Europe to introduce legislation covering the use of drones. The Small Unmanned Aircraft (Drones) and Rockets Order SI (Statutory Instrument) 563 of 2015 was introduced earlier this year.

There are an estimated 4,000 to 5,000 drones already in use in Ireland and numbers are increasing rapidly.

The new legislation is intended to specifically addresses the safety challenges posed by drones.

Under the legislation, a drone cannot operate within five kilometres of an aerodrome or airport. It cannot be used over the heads of an assembly of people, over urban areas or in restricted areas such as military installations or prisons.

A drone is not allowed to fly higher than 120 metres or more than 300 metres from its operator.

Drone registration is a two-step process. To register a drone, the registrant must be 16 years of age or older. Drones operated by those under 16 years of age must be registered by a parent or legal guardian.

A nominal fee will apply from February 2016 but this has been initially waived by the IAA in order to encourage early registration.

IAA director of safety regulations Mr Ralph James said the mandatory registration of drones will help to monitor the sector better. The IAA encourages all drone operators to take part in training courses which are available through a number of approved drone training organisations.

The mandatory registration is being brought in before Christmas when it is anticipated thousands of drones will be sold, according to the Minister for Transport Paschal Donohoe.

He said: “The speedy response by the IAA to this fast developing aviation area will make sure that drones are properly regulated and registered for use. As a result, Ireland is well placed to exploit the drone sector and to ensure industry growth in this area.”