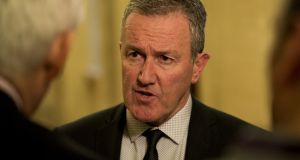 Conor Murphy said: ‘The reason we had to go into lockdown is because the health service has been under-resourced through austerity cuts for many, many years’. Photograph: PA

For the fourth day in succession the North’s Department of Health reported no deaths from coronavirus in Northern Ireland, where the death toll remains at 537.

The department in its daily bulletin on Wednesday evening also reported that 13 more people tested positive for Covid-19, taking the total number of confirmed cases in Northern Ireland to 4,818.

So far 61,418 people have been tested in the North for the virus.

Meanwhile, the North’s health Minister Robin Swann of the Ulster Unionist Party (UUP) rejected an assertion by Sinn Féin finance Minister Conor Murphy that the reason Northern Ireland went into lockdown was because of under-resourcing of the North’s health service.

Mr Murphy claimed on Wednesday morning that lockdown would not have been necessary in Northern Ireland but for what he described as British government austerity.

“If we had a very robust health service which was well resourced then it would have been fit to cope with the pandemic,” said Mr Murphy on Wednesday.

“The reason we had to go into lockdown, and people should understand this, is because the health service has been under-resourced through austerity cuts for many, many years,” he told BBC Radio Ulster’s Good Morning Ulster programme.

“The fact that we had to go into lockdown is because our health service has suffered from decades of under-investment,” he added.

Mr Swann, who at the outset of crisis was criticised by Sinn Féin for his handling of coronavirus, said he took “exception” to the comments.

“We had to go into lockdown because that was how the rest of the world, that was how Europe, was managing Covid-19,” he said.

Asked about the issue on Wednesday, First Minister Arlene Foster of the Democratic Unionist Party (DUP) said she “did not want to get in a political row”.

She did say, however, that “right across the world everybody went into lockdown for a number of reasons and one of those reasons that was common was the fact that we want to protect our health services”.

“Hence, [the ] preposterous claim by Murphy that austerity necessitated lockdown. Next, it will be that every job now lost is down to the wicked Brits,” he added.

Calling on Mr Murphy to clarify his comments he said: “There is, to my knowledge, no evidence suggesting that the reason for the Covid-19 lockdown is the financing of our health service. Indeed other developed economies which spend a higher proportion of GDP on health services have also entered lockdown to prevent onward transmission of the virus and save lives.”

Later on Wednesday, Mr Murphy said it was “very clear that the lockdown was necessary to save lives, to slow the spread of the virus and prevent the health service from being overwhelmed”.

“There is no doubt that 10 years of Tory austerity and cuts, underfunding and lack of investment negatively impacted on the capacity of the health service to respond to the pandemic and on the extent and length of the lockdown,” he added.