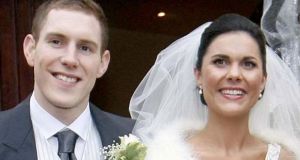 John and Michaela McAreavey are pictured on their wedding day in 2011. File photograph: Irish News/PA Wire.

The investigation into the 2011 murder of Michaela McAreavey in Mauritius has been defined by sustained indifference, Stormont’s Deputy First Minister has said.

Michelle O’Neill said she shared the view of the teacher’s family and friends that not enough has been done to catch those responsible for her death while on honeymoon on the Indian Ocean island.

Mrs Foster said the 27-year-old’s murder had brought “absolute devastation” to her widower John and her family.

Mrs McAreavey, the only daughter of Tyrone Gaelic football manager Mickey Harte, was murdered when she returned to her hotel room alone and disturbed a burglary. Two former hotel workers were acquitted after a trial on the island in 2012.

Mr McAreavey has been pursuing a campaign for justice and has accused the Mauritian authorities of being more interested in preserving the island’s reputation as a holiday destination than catching the killers.

Ms O’Neill said: “As the tenth anniversary of Micheala McAreavey’s death approaches, myself and Arlene Foster as joint heads of government have written to the prime minister of Mauritius to request that the government there do all that they can to bring those responsible to justice.

“Her loss was acutely felt right across the island of Ireland and even beyond.

“From her untimely death, the McAreavey and Harte families have had serious concerns about the investigation. In the memory of Michaela, her family have fought a long battle for truth and for justice.”

Ms O’Neill said it is “the family’s contention that the Mauritian investigation is being defined by sustained indifference” and that they have “no tangible evidence” that the authorities are serious about pursuing those responsible.

“I too share that view. The investigation did not and has not given confidence to the family that everything that could be done was being done,” she added.

Mrs Foster recalled visiting the Harte family’s home after Mrs McAreavey’s death and said “none of us with children could fail to be moved with the absolute devastation” they were experiencing.

“If our letter can in any way help move the investigation along, then it was the least we could do,” she said. - PA