Temperatures forecast to rise early next week, reaching up to 22 degrees on Tuesday 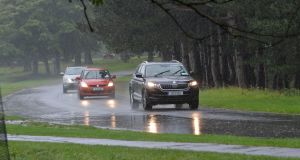 There’s no Indian summer on the horizon yet, with showers and breezes forecast for the weekend, accompanied by sunny spells in some parts.

The highest temperatures over the weekend are set to range between 13-18 degrees Celsius, with some warmer air blowing over the island early next week.

Saturday is due to be a wet and sunny day, with cooler temperatures only reaching highs of between 13 and 17 degrees. The best of the sunshine will be in the southeast, while the afternoon will turn cloudy, with longer spells of rain over the northern half of the country.

Saturday night will be mainly dry, leading to bright sunny spells early on Sunday. Rain will spread eastwards and become widespread through Sunday afternoon, but it will become dry again by nightfall. Highest temperatures on Sunday are due to reach 18 degrees and the rain will return overnight.

Monday will be a cloudy day with yet more rain, but warm, with temperatures up to 19 degrees Celsius. Tuesday will be warmer again, with highs of 18 to 22 degrees. However, rain is forecast again on Tuesday, with some clear spells in the afternoon.

Temperatures are set to drop slightly on Wednesday, with more rain set for Thursday and Friday.

For now, sadly, the much hoped for final blast of summer heat is not yet in sight. But don’t lose all hope. Four years ago, on a day in September 2016, a maximum temperature of 26 degrees was recorded in the Phoenix Park, the highest such recording for the month since September 1961, while Dublin Airport recorded its hottest September temperature since records began in 1942. We’ve still got time.