NI Assembly set to be recalled for debate on loyalist violence

Foster condemns violence in which 41 police officers have been injured 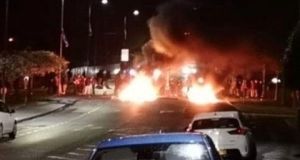 Barricade burns in the middle of North Road in Carrickfergus during another night of disorder near Belfast. Photograph: PA Wire

The North’s Assembly is set to be recalled on Thursday to debate a motion condemning recent violence and attacks on police in loyalist areas.

The Alliance Party, which proposed the motion, secured the required support of 30 Assembly members to recall MLAs from Easter recess, with the sitting expected to take place on Thursday morning.

It was signed by members from all five parties in the Northern Executive.

“Weeks of tensions from a number of issues, incited and encouraged by a number of people who really should know better, have brought us to this point,” the Alliance Party leader, Naomi Long, said.

“The violence has to stop, but so does the political cover given through vague comments and empty threats.

“There is no room for ambiguity – this violence must be condemned by a united Assembly, which fully supports the rule of law in Northern Ireland. ”

A total of 41 police officers have been injured in the violence, the Police Service of Northern Ireland (PSNI) said on Tuesday.

Nine more officers were injured on Monday evening in Ballymena, Co Antrim, during disorder around an illegal loyalist parade.

Speaking to reporters in Fermanagh on Tuesday, Northern Ireland’s First Minister Arlene Foster condemned the violence and appealed directly to “young people who are angry at this moment in time – do not get yourself a criminal record”.

She also said she had spoken to youth workers who “expressed to me that part of the issue, not it all, but part of it is the fact that there are no youth centres open at present because of Covid restrictions”.

“I’ve asked the Executive to look at that urgently and to get those youth centres open immediately . . . so those youths can come off the streets and come away from some malign influences that are in our society.”

Ms Foster called again for the resignation of the North’s Chief Constable, Simon Byrne, saying that “confidence has gone in his leadership”.

Mr Byrne has refused to step down and has defended the police’s actions. In a statement issued in her capacity as Minister for Justice on Tuesday, Ms Long said the Chief Constable had her full support.

The North’s unionist parties demanded Mr Byrne’s resignation following the decision last week not to prosecute 24 Sinn Féin politicians for their attendance at the funeral of Bobby Storey in apparent breach of the Covid-19 rules in force at the time.

“The rule of law is very important to me, individually and as party leader, and last week when it was very clear that the rule of law had been damaged because Sinn Féin presented themselves as above the law, a special status for their funeral whilst everybody else had to deal with the restrictions at particular points in time,” Ms Foster said.

“I recognise that there is huge anger about that. But if the rule of law is to mean anything, it is that everybody is equal under the law and everybody has to be equally subject to the law,” she said.

At a press conference in Belfast on Tuesday, Chief Superintendent Davy Beck said police were in discussions with local councillors, community representatives and church groups who were trying to bring the violence to an end.

“I would appeal to all people with influence to use that influence to put at stop to this. There’s a choice – this doesn’t have to go on. This can be brought to a conclusion and an end,” he said.

Asked who he believed was responsible for the disorder, he said there were a “small number of disaffected groups, groups that are linked to criminality that are involved in orchestrating and promoting this violence”.

“My evidence for that is that when officers responded to the incidents they were met with petrol bombs, with heavy masonry, with debris that has already been prepared, so to me that indicates a degree of orchestration, preparation and intent by the people involved.”

The police have made a series of recent drug seizures against the breakaway loyalist faction the South East Antrim UDA, which is believed to be behind the disturbances in the Newtownabbey area.

Elsewhere, senior sources indicated that loyalist paramilitaries have been stoking tensions among young people but it is not believed to be a co-ordinated campaign.

Tensions have been heightened in loyalist areas since January – where there is opposition to the Northern Ireland protocol because it places a customs and regulatory border between the North and the rest of the UK – and that anger increased further last week following a controversial decision not to prosecute 24 Sinn Féin politicians for attending the funeral of Bobby Storey during Covid-19 restrictions.

The PSNI said on Tuesday that Tactical Support Group officers were attacked after police attempted to engage with those present at an unnotified parade in the Crebilly Road area of Ballymena at about 9.35pm on Monday.

A stretch of the M2 was closed for a time to allow debris to be cleared from the carriageway, including a wheelie bin that had been thrown onto the motorway.

Petrol bombs and masonry were also thrown at police in Newtownabbey and Carrickfergus in Co Antrim, and in Derry.

In Carrickfergus, an 18-year-old man was arrested on suspicion of possessing articles for use with petrol bombs.

Chief Superintendent Davy Beck said the “reckless and criminal behaviour” placed officers’ lives in danger and “such senseless behaviour shows the blatant disregard those responsible have for the safety of others by throwing debris onto a motorway”.

“It is extremely fortunate no one was seriously injured, or worse,” he said.

He called again on “all those who have influence to do what you can to bring an end to this violence as no one wants a repeat of these disgraceful scenes”.

Police also received a report that a brick had been thrown at a taxi on the main Limavady Road.

A number of petrol bombs were also thrown at police during a security alert in the nationalist Templemore area of the city.

On Monday afternoon, groups of loyalists, some wearing masks, marched through the streets in towns across the region, including Portadown, Ballymena and Markethill.

The PSNI is investigating those marches, which appear not to have been notified to the Parades Commission.