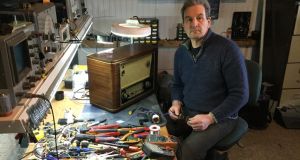 ‘People have been dragging out radios that have been lying in the barn for the past 40 years,’ says Vincent Macklin who began offering radio repair services during lockdown. Photograph: Courtesy Vincent Macklin

Vincent Macklin has put The Chieftains, The Strypes and Paul Brady in the limelight during more than three decades running a stage sound and lighting company. But when the pandemic struck last year, the curtains suddenly fell on his unceasingly busy world.

“It was a major shock to the system,” he said. “I’m at this since 1987. It’s the first time ever that I had nothing to do. The events business is go, go, go, all hours of the day and night. It’s not nine to 5, five days a week. You get tuned into that, and then it just stopped.”

At a loss as to how to fill the gaping void in his daily life, Monaghan-based Macklin turned to restoring and repairing radios, initially, he says, for his sanity. But he’s built the pastime into a business during the past 12 months, with customers contacting him from “Waterford, Cork, Carlow, Dublin, all over”.

Macklin is one of 840 repairers listed on Repairmystuff.ie, an online directory helping Ireland’s consumers repair rather than replace everything from kettles to keyboards.

The site, which was set up in May 2018 by Monaghan County Council, has gone national and has seen a sharp rise in usage during the pandemic. Data provided from the council shows it was used by 73,450 people in 2020, up almost 15 per cent on the previous year, with all the indications showing there has been a further spike in its use this year.

Nial O’Connor, website manager and environmental officer with the council, said the idea was born out of a regional waste management plan initiative “to help the repair industry”.

“The objective was to support repairers,” he says.

“A colleague of mine originally drew up a paper-based version of the directory for local repairers in Monaghan. Then we decided to ask other local authorities to collaborate with us on the project.”

The Local Authority Waste Prevention Network and the Environmental Protection Agency (EPA) came on board and the site went live originally with about 500 listed repairers .

Users can type in what they need repaired and their location, and the free-to-use website will match them up with the details of their nearest repairer. Electronics are the most requested repairs with TVs and phones topping the list.

“But there is a good trade for repairing the likes of hair straighteners too, for example,” says O’Connor. “They can cost up to €140 or €150 to buy. If the thermometer blows on them, it is expensive to replace. Businesses listed on the website will repair them for as little as €30. That’s a great saving.”

O’Connor stresses the financial as well as the environmental sense of repairing rather than replacing. A broken washing machine, for instance, can generally be fixed for half the price of buying a new one, he cites, giving years more use.

As well as electronics and appliances, the site lists more than 90 traders who mend clothes and bags, 65 furniture and upholstery repairers, 55 that fix shoes, boots and leather products and almost 40 who refurbish musical instruments and equipment.

Treadmills – listed under the more than 90 fitness and sport equipment repairers – has been a popular search during the pandemic.

Unsurprisingly, Dublin tops the league for the number of businesses on the site, with 245, but every county in the Republic has listed repairers, who can register online at no cost.

Analysis of traffic on the site shows a relatively even spread of use across age groups, with 55-64 year-olds most likely to consult the directory, followed by those aged 25-34 and then 45-54. People aged 18-24 were least likely to use it. Men (54 per cent) are slightly more likely to use it than women (46 per cent).

O’Connor says as well as the economic savings, those choosing to repair are doing their bit for the planet, pointing out that the manufacture and distribution of goods is “often the most environmentally damaging aspect of a product’s lifecycle”.

Every person in Ireland produces 586kg of waste a year, the sixth highest in the EU, the website points out. Latest figures from the EPA show more than 62,700 tonnes of electrical and electronic equipment were thrown out by Irish homes in 2018. Large household appliances accounted for 63 per cent of the waste, consumer equipment for 12 per cent, IT and telecommunications equipment 10 per cent and small household appliances 4 per cent.

Despite the statistics showing Ireland’s reputation for a continuing throwaway culture, O’Connor says there is a growing appetite for repair.

“It is still niche,” he admits. “But at a policy level we are switching to that circular economy idea, there is a growing awareness and we are playing our part on that.”

At his work bench in Monaghan, Macklin says he believes the pandemic has given people more time to clear out attics and garages, which he credits for part of the success in his radio repair venture.

“People have been dragging out radios that have been lying in the barn for the past 40 years, that may have belonged to granny or granda or was a wedding present for their parents,” he says. As well as restoring them, he will also fit Bluetooth and FM modules which run through the original valve technology “giving it that warm sound and making sure they don’t just end up sitting on a shelf”.

Repairs can cost from €120 up to about €350 for the “full works” including cabinet respray, renewed veneer, polish and a change of speaker cloth. He also refurbishes hi-fis and stereos made in the 1970s and 1980s.