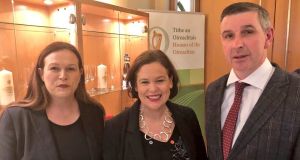 A newly-elected Senator backed by Taoiseach Leo Varadkar says he is willing to vote against the so-called “backstop” arrangement that would see Northern Ireland effectively remain under EU economic rules in a no-deal Brexit scenario.

Ian Marshall, a former president of the Ulster Farmers Union, was elected to the Seanad yesterday in one of two byelections to the Upper House.

Mr Marshall, from Markethill, Co Armagh, was approached by Mr Varadkar to stand as an Independent and topped the poll with the support of most of Fine Gael, Sinn Féin and Independents.

Mr Marshall says he was born into an Ulster Unionist family but was never a member of a political party, instead focusing on farming politics.

He will remain in his position in the Institute for Global Food Security in Queen’s University Belfast, while taking his Seanad seat.

Describing himself as a “true democrat”, he said a second referendum on the terms of the British exit deal should be held. “It is not undemocratic to review the situation two years on,” he said.

The underlying principle of the backstop – that Northern Ireland would be treated differently from the rest of the UK – is “not palatable”.

Mr Marshall said the final Brexit deal must satisfy Northern Ireland, the Republic of Ireland and the United Kingdom generally, adding that “some hard questions” needed to be asked. However, Mr Marshall said the onus is on the British government to “come up with solutions”.

Meanwhile, Sinn Féin’s backing for Mr Lawlor led to claims from Fianna Fáil that a potential coalition between Fine Gael and Mary Lou McDonald’s party is a real possibility.

“When the chips are down, Leo Varadkar is happy to take the support of Sinn Féin and Sinn Féin is happy to give it,” Fianna Fáil Laois TD Seán Fleming said. “Their actions have spoken louder than words.”

Carlow Kilkenny Fianna Fáil TD John McGuinness, however, said the move “calls into question the current attitude towards Sinn Féin who are now major players when it comes to the formation of the next government”.

Mr McGuinness said it should lead to a reassessment of Fianna Fáil leader Micheál Martin’s strategy of consistently saying Sinn Féin is unfit for office.

Martin Heydon, the chairman of the Fine Gael parliamentary party, insisted there will be no coalition with Sinn Féin. “Fianna Fáil is trying to deflect from its failure to secure either of the seats,” he said. “Fine Gael’s absolute rejection of any future deal with Sinn Féin has been clearly set out by the Taoiseach.”

A Sinn Féin spokesman said Mr Martin’s “relentless criticism” of Sinn Féin meant made it difficult for its TDs and Senators – the electorate in a Seanad byelection – to support any Fianna Fáil candidates.

“There was no way that Sinn Féin TDs or Senators were going to vote for an Fianna Fáil candidate given Micheál Martin’s relentless attacks on Sinn Féin. There is a definite resentment at Micheál Martin’s leadership.”