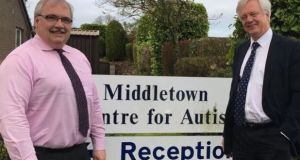 Brexit secretary David Davis was forced to apologise during the week for not telling Northern Irish politicians about his first, farcical visit to the Irish Border.

Davis made the unannounced trip on Monday to several sites along the Co Armagh side of the Border, almost two years after the Brexit referendum.

Former SDLP leader Mark Durkan, in words of considerable restraint, described the visit by Davis as an “empty exercise” so that “he would have the photo in his album…this was all done just to eliminate an obvious point of criticism and, of course, it was done so there was no actual engagement.”

And why would there be any engagement given that the British government does not give a damn about the Border? Post the John Major/Tony Blair eras Britain has reverted to type, avoiding – as former home secretary and prime minister James Callaghan was advised – “getting sucked into the Irish bog”.

At the end of March, British prime minister Theresa May walked through a farm between Bangor and Belfast in the constituency of North Down and looked indifferently at a cow, more than 50 miles away from the nearest section of the Border.

The British indifference to the Border is indefensible given that its fate is one of the crucial issues in the UK’s exit negotiations with the EU.

When asked whether she would be prepared to go to the Border and see for herself the potential issues concerning people, May replied: “My diary over the next year hasn’t yet been set, but all I am saying is I understand…I think it’s not a question of just whether I actually go and stand on the Border, it’s a question of do I understand the impact that has for people?

There is something almost slapstick about this. I was reminded of Spike Milligan’s novel Puckoon, first published in 1963. In an upstairs room at the Duke of Wellington Hotel in 1924, “several high ranking grim-faced boundary commissioners from both sides faced each other across a giant map of Ireland…across the map, running left to right was a thick red pencil line that terminated just short of the Atlantic. It was the threatened new border. In its path lay sleeping Puckoon.”

For 10 days they had argued over the last few miles of frontier; one of them then decided it was time to be decisive: “We only have this bit here to partition and the pubs close in an hour. Why not let’s all put one hand on the red pencil and draw a line that falls naturally and peacefully into place?”

And so the fate of Puckoon was sealed; now to be divided by the border, with a customs shed on hallowed church ground.

The current British government seems to take the Irish Border question as seriously as Milligan’s boundary commissioners. May has said no British prime minister could ever agree to the EU’s “backstop” option for Northern Ireland, which would require the UK to participate in a “common regulatory area” with the EU. She has also promised there will be no hard border on the island of Ireland, while insisting on leaving the EU customs union and avoiding a border in the Irish Sea. How are these objectives compatible? The new talk is of a “highly streamlined customs arrangement”, making use of technology to avoid laborious border checks, talk that has been derided by the EU officials negotiating Brexit.

During the week three grumpy former taoisigh – Bertie Ahern, John Bruton and Brian Cowen – came together to express their concerns; collectively they were a reminder that Irish interest in Britain does not travel in the other direction. It has frequently been thus. In 1969, James Callaghan admitted of himself and his colleagues “nobody understood the finances of Northern Ireland”. Spike Milligan would also have enjoyed the private exchanges between Margaret Thatcher and her officials about the Border in the 1980s. Sir David Goodall, one of the diplomats negotiating with the Irish government, has outlined how, late one night at Chequers, Thatcher made the proposal that if the Northern Catholic population wanted to be in the South: “Well, why don’t they move over there? After all, there was a big movement of population in Ireland, wasn’t there?”

Margaret Thatcher thought that if we had a straight line border, not one with all those kinks and wiggles in it, it would be easier to defend

Goodall recalled: “Nobody could think what it was. So finally I said, you are talking about Cromwell? She said, that’s right, Cromwell.” Sir Charles Powell, Thatcher’s private secretary at this time, also suggested she wanted the Irish Border to be redrawn: “She thought that if we had a straight line border, not one with all those kinks and wiggles in it, it would be easier to defend.”

A Border stubbornly full of kinks and wiggles, a hostile EU, a blind English nationalism, fed-up Irish taoisigh and a Brexit secretary and prime minister straight out of a Spike Milligan novel. It will be a very interesting summer.