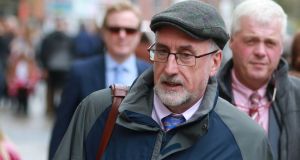 Unions are optimistic that the Government will agree to accelerate steps to end the two-tier pay system for newer entrants to the public service.

Talks between public service unions and Government representatives on the issue of lower rates for some 60,000 staff recruited since January 2011 began yesterday.

The Government has maintained that while it would review the two-tier system, funding to tackle the issue would not be available until after the current public service pay deal expires at the end of 2020.

Earlier this month, the annual conferences of the three main teachers’ unions backed motions calling for potential strike action unless the Government committed by next month to address the issue.

Arriving at the talks at the Department of Finance in Dublin, Shay Cody, joint general secretary of Fórsa trade union, said there were no assurances that the Government would shift its position.

He said “the fact that we are talking gives grounds for some optimism that we can make some progress” but that the process could be technical and complicated.

A source said the talks were looking at how rather than when the two additional points on the pay scale for staff recruited after January 2011 could be tackled. It is understood unions were taken through a report drawn up by the Department of Public Expenditure on the two-tier pay system.

New figures presented at the talks suggested that ending this system would cost about €195 million – slightly less than the €200 million forecast previously.

Teachers’ representatives signalled that abolishing the additional points of the pay scale would not mean the end of the pay discrepancy for their members as recent entrants also lost out on qualification allowances in place for more longer serving personnel, sources said.

The Department of Public Expenditure said yesterday’s talks on the new entrant issue provided “an opportunity for a detailed exchange of views between the parties”. It said further talks were planned.

Adrian Kane, a Siptu organiser, said the two sides had agreed to hold a further meeting on the issue of pay for public servants in June.

“The period before that meeting will be used by both sides to establish the full extent of the issues which are to be discussed,” he said, adding that it was “imperative” that the two-tier pay issue be resolved in a timely manner.

As the talks got under way, a group representing small and medium sized businesses said the Government must stand firm in the face of public service pay demands, even if it results in prolonged industrial action.

It said that if public service personnel “feel the grass is greener outside the public service, there are thousands of vacancies available for them to fill right now in the private sector”.

“Ireland must not repeat the disaster that was benchmarking in 2002,” Isme chief executive Neil McDonnell said.