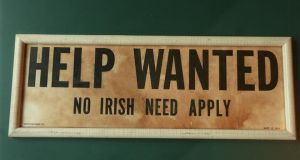 The New York Times has proved definitively that the phrase “No Irish need apply” (NINA) was in widespread use in the middle of the 19th century in the United States.

The newspaper has identified at least 29 examples of the phrase in its classified advertisements. A variation, “Irish need not apply,” turned up at least seven times, and there were other examples, from “No Irishman need apply” to “Irishmen need not apply” to the phrase “No Irish.”

One advertisement was for a “young girl, 14 or 15 years old, either American or German, to take care of a young child. No Irish need apply.”

The paper identified a row of classified advertisements from May 1st, 1855 all of which requested a Protestant for housekeeping duties. These were seen at the time as specifically excluding Irish Catholic immigrants.

The evidence from the New York Times classified advertisements appears to have finally disproved a paper by history professor Richard Jensen. His paper ‘No Irish Need Apply: A Myth of Victimisation’ was published in the Oxford Journal of Social History in 2002 and has remained controversial since.

Prof Jensen wrote: “The fact that Irish vividly ‘remember’ NINA signs is a curious historical puzzle. There are no contemporary or retrospective accounts of a specific sign at a specific location. No particular business enterprise is named as a culprit. No historian, archivist, or museum curator has ever located one ; no photograph or drawing exists.”

It went on to state that in the entire file of the New York Times from 1851 to 1923, there are two NINA ads for men, one of which is for a teenager. “The overwhelming evidence is that such signs never existed”.

Prof Jensen’s claim was challenged by a 14-year-old high school student Rebecca Fried. Writing in the same journal earlier this year, she discovered from newspaper archives that the phrase “No Irish need apply” was in widespread circulation in the United States in the 19th century and even into the 20th century.

She searched digitised newspaper bases and found innumerable examples of “No Irish Need Apply” classified advertisements in cities across the United States.

The job advertisements tended to be clustered towards more menial activities including store clerks, farm workers and coachmen.