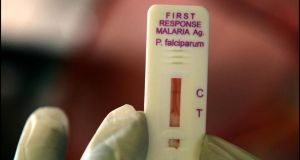 A doctor holding a test positive test for Malaria at the Magburaka PHC Primary Health Clinic in Sierra Leone. Researchers at University College Cork have developed a new microneedle immunisation technology which could prove hugely significant in the fight against malaria. Photograph: Brenda Fitzsimons/The Irish Times.

Researchers at University College Cork have developed a new microneedle immunisation technology which could prove hugely significant in the fight against malaria.

The research team, headed up by Dr Anne Moore, has developed a microneedle-based patch to offer protection using much lower levels of vaccine than existing methods.

Dr Moore said the patch “overcomes one of the main problems with this type of vaccine which relates to overcoming pre-existing immunity to the vaccine.”

She is travelling to California next week to meet venture capitalists and technology companies with a view to commercialising the research.

Dr Moore, who lectures in pharmacology at UCC’s School of Pharmacy, has been working on the project since 2007 with funding from Enterprise Ireland and Science Foundation Ireland.

The work by the UCC researchers was completed in collaboration with others at Oxford’s Jenner Institute.

The research suggests using a microneedle patch would overcome the need to make and use multiple vaccines to provide immunity to some of the world’s biggest killers.

“This could have significant consequences on the costs and logistics of vaccination not just for malaria which kills a child every 15 seconds but for other diseases too,” said Dr Moore.

The patch has tiny silicon ‘microneedles’ that create temporary pores in the outermost barrier layer of the skin to allow the vaccine to flow in.

Dr Moore said the experimental vaccine was based on a live adenovirus which is one of the most potent vacccine plaforms tested to date in humans.

It is based on an adenovirus similar to that which causes the common cold but is engineered to be safer and to deliver a protein from the malaria causing parasite to the immune system.

Adenoviruses are curently being developed to prevent or treat diseases such as malaria, HIV, influenza and Ebola and to combat other infectious diseases related to biodefence.