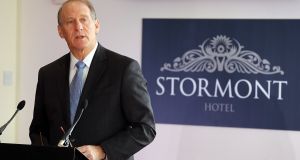 Talks chaired by Dr Richard Haass (above) and Harvard professor Meghan O’Sullivan are to continue over the weekend. Photograph: Paul Faith/PA Wire

Northern Secretary Theresa Villiers has appointed a new Parades Commission as the Haass talks enter a crucial stage in pursuit of agreement on parades, flags and the past.

However, she said that if the Haass talks prove successful the term of office may be brought to an early end. Joining her on the incoming commission are: Alliance Party member Glyn Roberts, chief executive of the North’s Independent Retail Trade Association; solicitor Sarah Havlin; Colin Kennedy, chief executive of the Mary Peters Trust; and Frances McCartney, a part-time judge and partner of a Scottish law firm.

Ms Villiers said she hoped the Haass talks will “lead to a locally agreed means of adjudicating contentious parades in the future.

“But in the meantime, the Parades Commission remains the legally constituted body responsible for determining these matters.”

Push for agreement
Talks chaired by Dr Richard Haass and Harvard professor Meghan O’Sullivan are to continue over the weekend as the two American diplomats strive to get the five parties – the DUP, Sinn Féin, the SDLP, the Ulster Unionist Party and Alliance – to reach agreement before Christmas.

While much of the focus this week has been on the proposal that there could be limited immunity for those who carried out Troubles-related killings, sources said that the flags issue was generating particular tensions between Dr Haass and the DUP.

Dr Haass proposed the idea of a cross-community flag for Northern Ireland which the unionist parties have rejected, with Sinn Féin and the SDLP generally being silent on the matter, indicating a certain nationalist scepticism about the idea.

Sinn Féin has expressed confidence that the Haass talks can be successful. Sinn Féin Assembly member Gerry Kelly said that the parties had room to make compromise on the three issues.

“I am confident that we can crack this, but the proof is in the pudding and we will see next week,” said Mr Kelly as he entered talks yesterday.

The main focus this week has been on the proposal that people who carried out Troubles-related killings and other crimes could be allowed limited immunity from prosecution if they provided victims with the truth about their actions.

Positive if qualified support for the idea from First Minister Peter Robinson and former DUP minister for finance Sammy Wilson has raised the prospect of limited immunity being part of any agreement that might emerge.

The SDLP and Ulster Unionist Party, who with the DUP, Sinn Féin and Alliance are participating in the talks with Dr Haass have expressed concerns about the proposal.

SDLP MLA and negotiator Alex Attwood warned that limited immunity must not become a “free for all” and “must acknowledge the concerns and anxieties of victims and survivors”.

Mr Attwood, however, also expressed some confidence that a deal could be done before Christmas or by the end-of-year deadline set down by Dr Haass.

Ulster Unionist Party leader Mike Nesbitt said that on limited immunity the real danger was that it would yield “limited truth”.

Alliance MP Naomi Long warned that if the talks failed then Northern Ireland may “never get another opportunity to address these issues”.

Traditional Unionist Voice leader Jim Allister, who is not a party to the Haass talks, said that limited immunity would be a “further perversion and corruption” of the North’s criminal justice system.