No reported issues for first 55-metre tram journey in Dublin 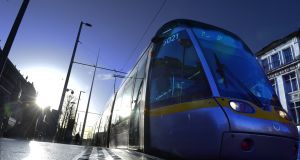 Luas operator Transdev has said the new 55-metre tram which went into service on Dublin’s Green line on Wednesday poses no additional difficulties at O’Connell Bridge – which is ten metres shorter than the new tram.

Transdev was responding after drivers expressed concern that the new tram could be forced to stop at traffic lights on the bridge, a move which would see its rear sticking out across the south quays for at least ten metres.

At 55 metres the new tram is also seven metres longer than the Rosie Hackett Bridge between Eden Quay and Burgh Quay.

However a spokeswoman for Transdev said no problems had been reported on the first commercial run for the longer tram. She said traffic management systems were designed to ensure it would not get a red light while attempting to cross the bridges.

On the tram’s first outing from Brides Glen and back to Sandyford on Wednesday there were no reported issues at either bridge but ongoing congestion problems between St Stephen’s Green and College Green resulted in three trams being displayed as “Due” at the same time at the Westmoreland street stop.

The longer trams are not yet fully in service but another 55 metre tram will travel the route again on Thursday morning.

Driver and union representative Marc Winter told The Irish Times drivers had not received training on the longer trams and he expressed surprise that the 55 metre tram was introduced on Wednesday. He said there had been no consultation with drivers on health and safety issues.

Over the last 13 years the Luas fleet has grown in number from an initial 40 trams to 66.

French manufacturer Alstom said it has sold more than 2,200 Luas-type Citadis trams to 54 cities across the world and the new Luas model is the longest of its type in any of those cities.

A further six 55-metre trams are due to be deployed by May.

Senator Neale Richmond who is a commuter on the Green Line called on the minister for Transport Shane Ross to “immediately” authorise the purchase of a further seven longer trams to tackle crowding during morning and evening rush hour.