The twice weekly sailings will cut 1,200kms off the road journey for many hauliers currently opting for a land bridge via the UK, says Port of Cork executive 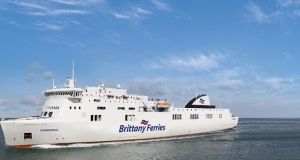 The MV Connemara will have the capacity to carry 300-400 car passengers all of whom can avail of cabin accommodation on the 26 hour crossing down to the historic port city of Santander in Cantabria.

It’s taken 14 years to come to fruition but when the Brittany Ferries ship the MV Connemara sails past Roche’s Point at the mouth of Cork Harbour on Wednesday morning for Santander, hopes will be high that the first direct link between Ireland and Spain will become a fixture on the high seas.

Commercial Manager at the Port of Cork, Capt Michael McCarthy, who has been working since 2004 to get the service up and running, has no doubts that the service has a strong future, with the prospect of Brexit and a hard border making it an even more attractive option for business.

“The Connemara is an ideal start up vessel for this type of service - she has capacity for around 100 trailers and 80 to 100 cars so she will cater for commercial haulage as well as tourists going to Spain while we are also very confident that she will generate a lot of reverse traffic,” he said.

The MV Connemara, which Brittany Ferries have chartered for an initial two year period, will also have the capacity to carry 300-400 car passengers all of whom can avail of cabin accommodation on the 26-hour crossing down to the historic port city of Santander in Cantabria.

Capt McCarthy explained that the commercial haulage element of the project should ensure its success particularly through the winter months when tourist traffic may be down as a direct sailing from Cork to northern Spain will offer significant savings for hauliers.

The twice weekly sailings from Ringaskiddy, every Wednesday and Friday, will take 26 hours but will shave around 1,200kms off the road journey for many hauliers currently opting for a land bridge via Rosslare, the UK and France down to Spain, he said.

“We estimate that hauliers will save around €1 per kilometre on fuel so for hauliers who have been going through the UK and taking a ferry to one of the ports in northern France, that’s a saving of €1,200 per trip per truck so that’s very significant and makes Cork-Santander very attractive.”

Capt McCarthy was confident of the success of the route long before the UK voted to leave the EU but Brexit and the prospect of a hard border with all the ensuing tariffs and delays at British ports makes the MV Connemara even more attractive.

“It’s a game changer in relation to Brexit - it’s EU direct into EU so compared to the land bridge route via the UK, you are avoiding all the possible tariffs and taxes that may come with Brexit and the huge delays forecast at British ports serving the continent so it’s going to be very attractive.”

In terms of existing trade, Irish fish and seafood exporters send huge volumes of produce to France and Spain while there is also a substantial trade in the other direction in everything from fruit and vegetables to wines as well as ceramics and timber, he said.

Capt McCarthy explained that the service was on the verge of commencing in the mid-2000s when the economic downturn led to the plan being stalled, but an upturn in both the Irish and Spanish economies in particular in construction has helped get the project up and sailing.

Not that Capt McCarthy sees the route as serving just those going to northern Spain - hauliers heading for the south of France and Italy will also be able to use it as will holidaymakers wanting to take their car to southern France as well as all parts of Spain and Portugal.

In between departing from Cork for Santander every Wednesday and Friday, the MV Connemara will also depart Cork for Roscoff in Brittany every Monday as the route which began in the 1970s continues to prove highly popular with both Irish and French tourists.

“We’re delighted the new service is with Brittany Ferries which is celebrating 40 years in Cork this year - they have been the most fantastic partners and both of us believe that the Connemara is an ideal start up ship and will lead to further investment in a larger vessel as we develop the route.”