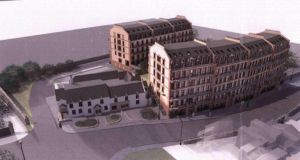 An architect’s drawing of the proposed apartment complex beside the Golden Ball pub in Kilternan. 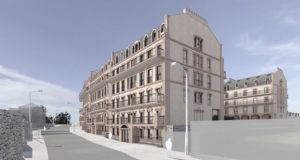 Residents in south Dublin have objected to plans for a six-storey Georgian-style apartment scheme at the foot of the Dublin mountains in Kilternan on the grounds it would be “totally unsuitable” for the local rural area.

Developer Greg Kavanagh’s Calerotech Ltd has sought planning permission from Dún Laoghaire-Rathdown County Council for the complex of 97 apartments at the Golden Ball pub. If granted permission it would be the first apartment scheme in Kilternan.

The design of the complex “seeks to delve into a portion of the nation’s richest historical architectural heritage” the application states, and is based on the Custom House and the “Georgian Squares of Dublin” according to the developers. It also represents a “back to basics” approach in terms of design, Calerotech said.

Local resident Anne-Marie Leen described the scheme as a “monstrosity of a development” which is “totally unsuitable to the areas and is only at best suitable for a city centre location, and probably not suitable in Ireland at all”.

The apartments would not be in keeping with the “countryside/village feel” of Kilternan, she said.

Another local, Ciarán Moulton, said the scheme would “adversely effect the views to the Dublin mountains enjoyed by local residents”, would worsen local traffic, and affect visibility on the main road.

The Balally Residents Association said the height and scale of the development was “more aligned to a city – not a rural suburb”. It would increase the already “massive traffic delays” and the pressure on the Luas Green line, it said.

Several residents emphasised the low-rise nature of the area, which is dominated by bungalows and two-storey houses, and said the additional traffic would damage air quality and affect the health of existing residents.

In relation to the scale, Calerotech said when Dublin’s Georgian squares were first planned they were considered “too urban” for their locations, and that 60 years ago “ Cabra, Crumlin, Ballymun etc” were mostly green fields.

“The ornate design of the exterior is of a significantly higher standard than typical apartment scheme designs and would be reminiscent of well-regarded architecture seen in London and Paris,” he said.

“I think it would be unlikely that a better designed scheme would ultimately materialise in future on these lands.”

Mr Kavanagh, the self-described “Ronaldo of the property market” 18 months ago left New Generation Homes, the high profile development company he founded with Pat Crean. New Generation made headlines from 2011 onwards when it spent up to €300 million buying up development land at the bottom of the market.

Submissions on the Kilternan plan can be made to Dún Laoghaire-Rathdown County Council until Thursday.