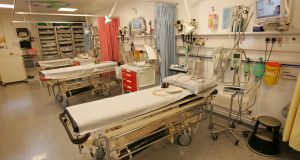 There are just under 400 people on trolleys in emergency departments or on wards awaiting admission to a hospital bed on Wednesday, nurses have said.

The Irish Nurses and Midwives Organisation (INMO) said the 396 people on trolleys represented a 23 per cent increase on the figure recorded on the same day last year.

The trolley numbers on Wednesday were down slightly on the 414 recorded by the INMO on Tuesday. It said the numbers of patients on trolleys in emergency departments and on wards were “startling” given it was the middle of the summer.

Theorganisation said nurses were looking to winter with a sense of dread at what might happen to overcrowding levels.

On Tuesday the HSE attributed the surge in trolley numbers to larger-than-usual numbers of people presenting at hospital emergency departments and respiratory illness linked to the warm weather.

The HSE said earlier this week the Mater Hospital in Dublin reported 277 attendances at its emergency department – the highest on record for a Monday.

It also said there were more than 60 hospital beds closed for infection-control reasons while there were also a high number of delayed discharge patients who remained in hospital.