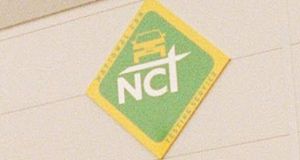 Inspections of all 47 national car test (NCT) centres last year failed to uncover any serious defects in lift mechanisms, where cracks detected in the equipment in recent days has led to the suspension of part of NCT checks over safety fears.

Following the suspension of vehicle underbody tests last week, the full tests are due to be restored as older inspection lifts are replaced in each centre.

Inspection reports conducted on the lift equipment in the 47 NCT centres last year, seen by The Irish Times, failed to uncover any defects such as cracking. The inspections are conducted annually by engineers on all lifting equipment on behalf of the insurers Zurich.

At the start of last week Applus, the company contracted to run the National Car Test Service (NCTS), asked staff to conduct visual checks on lift equipment following a warning from the manufacturer over cracks identified in similar lifts in Northern Ireland test centres.

On January 28th the company “received reports from staff in centres identifying a potential, similar defect” in NCT centres, a spokeswoman said. The following day the use of all vehicle inspection lifts were suspended as a precaution.

Drivers are advised to book and attend their NCT as normal, and that checks, apart from the underbody inspection, would be conducted. Drivers will have to return to have the underbody checked when the lifts are operational.

There is no charge for the second test to inspect the vehicle’s underbody as long as the vehicle passed all other elements of the NCT during the initial test.

It is understood the current defect is a hairline fracture along the scissor arm of the lift equipment.

The inspection reports of some centres noted minor issues to be addressed, such as bolts on equipment needing to be tightened.

The lifts were installed in NCT centres in late 2010 and early 2011, and enter a “defective life age range” when they are between seven and 10 years old, an NCTS spokeswoman said.

However, the spokeswoman said the main steel structure of the lift “would be expected to operate well in excess of 10 years with regular maintenance”.

She said the company has a contract with MAHA, the supplier, to conduct “all regular maintenance and repairs,” as well as condition surveys of the lifts.

One engineer who conducted annual inspections of NCT lifts at several centres last year, who did not wish to be named, said the type of hairline cracks causing the current concern were “difficult to spot”.

He said it was possible inspectors had failed to identify the small cracks, which were difficult to notice unless specifically looked for during the inspections.

The NCTS took the decision to replace the lift equipment following the safety fears over the presence of cracks, and the equipment was already due to be replaced in the near future, the NCTS spokeswoman said.

The cracks in the equipment would pose a safety risk given NCTS staff would be under the vehicle during the underbody inspection. However, the spokeswoman confirmed there had been no reported incidents of staff being injured “as a result of the defect on the lifts”.

She said the NCTS had commissioned a condition survey of all vehicle lifts by the manufacturers when it was first made aware of the problem last week. This assessment was “ongoing” and was expected to be completed by the end of this week.