Nasa signals return to the moon within five years

Technology in place for mission to the moon for first time since 1972, says Tom Cremins 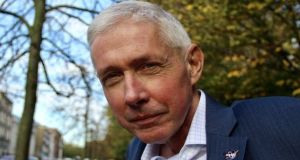 Tom Cremins: ‘Our goal is to have the first woman and the next man to demonstrate that it is a new age.’

The National Aeronautics and Space Administration (Nasa) is on course to return humans to the moon by 2024, one of its senior officials have said.

Tom Cremins, the head of strategy at the US space agency, told The Irish Times that the technology has already been developed to return humans to the moon for the first time since 1972, with the exception of the lunar lander.

It has to be developed to allow humans stay on the surface for up to 30 days at a time.

“That’s the big part of the kit that we don’t have right now and that’s the hard one. We are evaluating proposals from industry on their ideas of a lander that can go to the surface,” he said.

He envisaged the next lunar landings will be different as private industry will be involved at all stages and there will also be international co-operation. Japan may build a pressurised rover that will enable astronauts explore a much wider area of the lunar surface.

Consequently, the estimated cost at between $15 billion and $20 billion will be substantially less than the Apollo space programme which, at one stage, consumed 5 per cent of the US federal budget in the 1960s.

The discovery of water at the polar caps has been a “huge surprise” for scientists, he said, and makes living on the surface much easier than was envisaged in the past.

It is hoped to make the moon habitable for long-term missions by 2028 with the building of a hab (an inflatable lunar habitat) with the ultimate goal of a manned mission to Mars in the mid-2030s.

Mr Cremins said US president Donald Trump has reminded Nasa frequently that Mars is the priority.

“He’s been incredibly supportive, but as importantly, my boss [Nasa administrator] Jim Bridenstine has been barnstorming on this. We have had a lot of interest from speaker Nancy Pelosi. It’s all tied to money . . . We want to see it as a prep point for Mars while bringing our partners along from the start. We need to keep pushing out.”

Mr Cremins, whose family roots are in Cork and Meath, was guest of honour at the Boston College Ireland Business Council in Dublin on Friday night.

He also met with the Minister for Innovation Heather Humphreys to discuss collaboration between Irish scientists and Nasa.

Ireland will send its first satellite into space next year when Eirsat-1 is launched to the International Space Station. “A natural adjunct to that would be to fly something to the moon,” he said. “We have got a commercial landed payload service under way to launch small payloads to the moon and that could be everything from science instruments to commercial applications.”

Mr Cremins said a woman will “certainly” be on the first Artemis mission to the moon.

“Our goal is to have the first woman and the next man to demonstrate that it is a new age. Those two people will be selected fairly soon within the coming year.”