Miriam Lord: So long, Uncle Gaybo, even in death you got it right 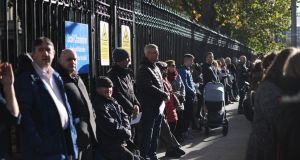 Die-hard Gay Byrne fans began gathering outside the Pro-Cathedral from 8 o’clock in the morning for the midday Mass. Photograph: Nick Bradshaw/The Irish Times

Even in death, Gay Byrne got it right.

His funeral, the final production, was pitch-perfect in tone and mood: a very conventional send-off for a most extraordinary man.

And for the last time, like almost every time, Gaybo hit all his marks.

This special was directed by Kathleen. She chose the music and the readings and the people who would speak. Her husband’s funeral mass was traditional, respectful, affectionate, wistful and warm.

Gay and Kathleen knew what he wanted: no fuss, just faith, family and friends.

That’s all the maestro had to do, because his audience – inside and outside St Mary’s Pro-Cathedral would still make it An Occasion.

“For as long as most of us can remember, Gay was a remarkable presence in Irish life – a consummate broadcaster and a veritable choirmaster of the national conversation,” said family friend, Fr Leonard Maloney SJ in his homily.

The requiem was striking in its simplicity. But there was stardust floating in the incense. A heady mix of light-entertainment stalwarts and RTÉ luvvies wedged themselves into the wooden pews, with a President and two former Presidents, the Taoiseach and a former taoiseach, the Lord Mayor of Dublin and a plethora of politicians and PR smoothies from past and present.

An absolute Occasion. And in the glare of the television lights and the shared space with household names, a family mourned the loss of their loved one – husband, father and granddad “Ra Ra”.

“We’ve had a charmed life,” he said to Kathleen as the light declined.

But Uncle Gaybo charmed a nation too. Ireland’s radio therapist. We thought he would be here forever.

Die-hard fans began gathering outside the Pro-Cathedral (or the Pro, as regulars call it) from 8 in the morning for the midday mass. They were there to say goodbye to Gay and enjoy the funeral.

Watch the parade into the church. Who would be at it? What would they be like in the flesh? Gaybo would have appreciated that.

Although, according to his radio contemporary and old pal Mike Murphy, he would have been complaining and giving out about people making a fuss over him. “I think he would have loved it secretly, but he would never have said it anybody, you know!”

Alongside the solemnity of ritual (Gay was a man of faith and a regular massgoer) ran a happy sense of a long life, well lived, with no small amount of achievement and a big place in the history books nailed down for posterity.

It was a bonanza for the reporters jotting down the arrivals before the service. Those on the celebrity beat burned some serious ink. Was there anyone at all left in Montrose to make a few shillings for the business?

Director General Dee Forbes, in the middle of an industrial relations/funding crisis led the charge. Apparently a bus was laid on from Donnybrook (that sort of stuff will have to go soon) to ferry mourners to Marlborough Street. Joe Duffy was in conversation against a marble limestone pillar with former president, Mary McAleese. Comedian Tommy Tiernan stopped for a quick word with Ray D’arcy, a fellow chat show host. Denis O’Brien caused a stir. The large contingent from INM shrugged their shoulders. “We don’t have to mention him any more.”

Look, there’s Pat Kenny. And Ryan Tubridy, with Andrea Corr. And the two Martys – Morrissey and Whelan. Bertie Ahern rambled in on his own and took a front pew off to the side.

There was feverish celebrity spotting going on behind the barriers outside.

Margaret Gaffney (79) from Mountjoy Parade arrived early with her sister Anne Kerrigan (72) from Blanchardstown so they could get a good spot. “We grew up with him. There’s only one Gaybo,” said Margaret. “They broke the mould when they made him.”

Anne agreed. “A legend. A lovely man. He had charisma. Gay was great fun and always had a little glint in his eye.”

“Did you see Mike Murphy?” we asked, having been told by another woman to “write down in your notebook how good he’s looking”.

“Did I see Mike Murphy?” repeated Margaret, looking very concerned. “Why? Is he sick?”

Regina O’Connor had come in from Kells in Meath. “Aaw, I just loved Gay.” She got a copy of the mass booklet. It had a lovely photo of Gay on the front. “Ah, that’s how I remember him. Isn’t he gorgeous. I’ll treasure this.”

Things were rather fraught on the celebrity spotting front for the ladies. “The Luas keeps driving by – it’s very slow – when people are going in and we’re raging.”

Ryan Tubridy arrived and spent the best part of 15 minutes chatting to the crowd. As he made his way in a Pro-Cathedral steward stepped forward and straightened the velvet collar on his coat for him. RTÉ’s big names dressed up for the occasion so they wouldn’t let dapper Gay, or the company, down.

The mass was lovely. Gay’s daughter – beautiful diction, like her Da – made a special point of praising the catering staff and the porters at the Mater Hospital who looked after their fellow Dub so well.

As Winter sunlight streamed through the semi-circular windows high on either side of the dome, a butterfly flitted through the dusty rays. The Palestrina choir sang beautifully.

And all the good things that have been said already about Gay Byrne where repeated again from the altar, and more besides. Kathleen Watkins, Gay’s beloved wife, smiled at her grandchildren.

It wasn’t all VIPs. Once they were seated, the stewards (it was a very well organised service) let members of the public into the church, 25 people at a time.

This was how it should be. What Uncle Gaybo most definitely would have wanted to see.

In they streamed, many of the regulars at morning mass in the Pro, the ladies with their Dunnes Stores bags and canvas shopping trolleys.

Gay’s coffin was shouldered in by family members and friends, including his grandson Cian. A huge spray of deep red roses among cool green eucalyptus and fern leaves was placed on top, with a copy of the Holy Bible.

For those who couldn’t get inside, the mass was relayed on speakers.

It’s an honour for this cathedral to welcome today someone who is a man of faith and a Dubliner,” said Diarmuid Martin, the Archbishop.

The crowd stayed on to applaud the hearse as it left for St Fintan’s cemetery at the foot of Howth Head. They applauded President Higgins. Leo Varadkar shook hands with admirers through the cathedral railings and was pursued down the street by admirers roaring “Leo, Leo!”

The Fianna Fáil leader, Micheál was still inside, hemmed into his pew by people looking for him to sign their mass booklets.

Joe Duffy was hugely popular with the crowd outside. (As was Miriam O’Callaghan, from a distance. “Isn’t she gorgeous all the same? Eight chilterin, so she has.”)

The roll-call of the shy and retiring spilled down the steps and onto Marlborough Street. A large man in an impressive coat wearing a dickie bow was in the middle of the street, bellowing about Gay to three fellow showbiz types: “A very, very good TV man. A suPREME radio man.”

Sisters Angela Coleman from Phibsboro and Margaret McKeon from Balbriggan had a hold of Joe Duffy. “It was beautiful. Wasn’t it beautiful, Joe?” said Margaret, who adored Gaybo. She told him she was delighted he was going to be in St Fintan’s, which is where she buried her own husband. “I’ll be able to visit the two of them now at the same time.”

“There were three people in that marriage,” said Angela, pointing to her sister. “I nearly died on Monday when I heard you say Gay was dead. But he got a great day for it, didn’t he Joe?”

A man clamped onto his arm and told him he was a credit to Dublin.

“Thanks for coming. You’re very good,” replied Joe. “Mind yourself, here’s the Luas and we’ll all be killed.”