Dublin Port makes third seizure of dogs in a week 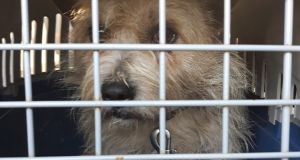 One of the dogs seized by Revenue officers on Friday at Dublin Port. Photograph: Revenue

Inspectors at Dublin Port have made their third seizure in a week of dogs being illegally taken out of the country.

All four puppies, which were approximately 12 weeks old, and the older dog were lacking completed vaccinations and paperwork for transport to the UK.

The men did not have pet passports for the dogs as required under the Animal Health and Welfare Act 2013.

The dogs were transferred into the care of the Dublin Society for the Prevention of Cruelty to Animals (DSPCA) who are conducting a follow-up investigation.

On Tuesday night, two Chihuahuas, a male and a female, were seized by customs at Dublin Port. The pair were hidden in the boot of a car leaving for the UK.

Only one of the dogs was microchipped, there were no pet passports or rabies vaccines and the dogs vaccination certs were actually for eight week old puppies.

DSPCA spokeswoman Gillian Bird said many people are “being lazy” in trying to smuggle animals out of the country without the proper documentation.

“We would like to remind anyone wishing to transport dogs to the UK that they must have a valid pet passport,” she said.