‘Nearly eight years down the line and it still has a grip on us ... It will never be over for us’ 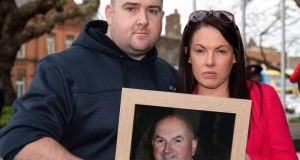 Michelle Ryan: ’Justice has been got to a degree, but we still feel… no, give me back Daddy. It is never going to be over.’ Photograph: Collins

Murder victim Bobby Ryan’s daughter and son have vowed never to return to their homes in Tipperary.

Michelle and Robert Ryan, who have children of their own, were forced to leave their native county in the wake of their father’s disappearance because the pain and suffering “just got too hard”.

Tipperary farmer Patrick Quirke was found guilty of murdering part-time DJ Bobby Ryan this week and sentenced to life in prison after a 13-week trial.

The jury delivered a majority verdict of 10 to two.

“After Daddy had gone missing, Tipperary got too hard for myself and Robert,” said Michelle.

“It really did. We moved out of it, and decided to move up to Cork.

“Things just got too hard. I was getting into the frame of mind, every spare minute I had, I was driving out to the Bansha woods. That wasn’t good for me.

“Robert, every spare minute he had, he was driving round looking for him. We said at that stage, we have to hand this over now into the hands of God and pray that God hands us back Daddy.”

Ms Ryan said she will “never move back down to Tipperary”.

“I think Robert is the same, even though we have wonderful precious memories of Daddy down there,” she added.

“It started off with memories that we will cherish of Daddy, but the memories came to an abrupt end. We can’t ever see ourselves go back.”

Despite Quirke being sentenced to life in prison for the murder of Mr Ryan, who went by the name Mr Moonlight, Ms Ryan said the ordeal “will never be over for us”.

“Justice has been got to a degree, but we still feel… no, give me back Daddy. It is never going to be over,” she said.

Speaking on RTÉ radio, she revealed she had a “full blown panic attack” while giving evidence at Quirke’s 13-week trial, the longest running murder trial in the history of the State.

“The minute they asked me to bring it back to the woods and finding the van, the smell that day in the woods just gripped me again, and the heat on my face, and where I was at the time,” she said.

“We are talking nearly eight years down the line and it still has a grip on us, to that degree. It will never be over for us.”

Mr Ryan’s van was found in Bansha woods on the day he disappeared, on June 3rd, 2011, after leaving the home of his girlfriend Mary Lowry at around 6:30am.

During the murder trial, the prosecution claimed that Quirke murdered his alleged love rival Mr Ryan so he could rekindle an affair with Ms Lowry (52).

Mr Ryan’s body was found in an underground run-off tank on a farm owned by Ms Lowry and leased by Quirke at Fawnagown, Tipperary on April 30th 2013.

“Life does goes on, the hours and days tick on, but to us we are still back there on June 3rd,” said Ms Ryan.

“Not a day goes by that we don’t get flashbacks.”

Ms Ryan also revealed that her mother Mary -who was separated from her father – was “equally” as devastated by the killing as her and her brother.

“She has been a tremendous support to myself and Robert,” she said.

“I know they were separated, but at end of day you can’t walk away from 20 years.

“There is still an attachment there, to a degree. She had two children from Daddy.

She was equally as upset as me and Robert.”

Just days after Quirke’s sentencing, Ms Ryan said she had to press on with her life, and was preparing a birthday party for her 10-year-old son and one-year-old daughter on Sunday.