Murder of Pat Finucane by loyalists remembered 30 years on

The Belfast solicitor was killed ‘to silence others’, his son tells memorial event 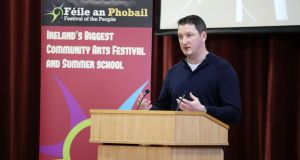 John Finucane speaks at St Mary’s University College in Belfast at an event to mark the 30th anniversary of the death of his father, solicitor Pat Finucane. Photograph: Kelvin Boyes/PA Wire

Belfast solicitor Pat Finucane was murdered to silence other human rights lawyers, his son has said.

This week marks 30 years since Finucane was shot 14 times by loyalists in collusion with British security forces. The solicitor was killed while having Sunday lunch at home with his family. He was 39.

Finucane’s son John was a schoolboy when his father died in front of him.

At a memorial event in St Mary’s University College in Belfast on Sunday, he recalled: “Our lives changed forever.”

The solicitor’s best years professionally were ahead of him at the time of his death, his son said.

“It was a deliberate decision to kill him, to silence other lawyers and prevent them from doing that type of work.

“What we see now is a generation coming through with lawyers, people wanting their human rights. I think that is very much a legacy of Pat Finucane and what he stands for and represents.”

Former British prime minister David Cameron acknowledged the “shocking” level of state collusion in the 1989 UDA killing after receiving a report on the evidence.

Desmond de Silva’s review confirmed agents of the state were involved in the killing and it should have been prevented – but ruled out an “overarching state conspiracy”.

The Finucane family has engaged in years of litigation over what they say is the British government’s failure to grant an independent public inquiry and strongly opposed the decision to order the de Silva review.

A UK supreme court judgment on legal action connected to the case is pending.

He said the Finucane family was using its influence to help everybody else, raising their voices for those who had none.

He said Pat Finucane was a decent human being, a hero who dedicated his life to aiding others.

“As a human rights lawyer it didn’t matter to Pat whether you were a republican, a unionist, a loyalist, or none of these.

“If you were arrested you have rights and Pat’s responsibility – his vocation, his mission in life – was to vindicate and defend those rights.

“Pat believed that the law should uphold and protect the rights of citizens. But he was not naive.” – PA