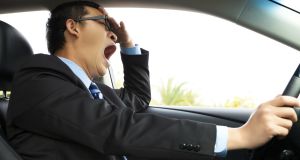 The Road Safety Authority (RSA) works hard with gardaí to ensure that trucks and buses being used on the road are in a roadworthy condition and that they are not being driven by drivers who are in danger of falling asleep at the wheel.

The life-saving laws that are there to protect the public from these risks are not, as one solicitor described recently when defending a bus driver in court for excessive driving, “red tape”.

Imagine a 46-tonne articulated truck coming towards you at 80km/h with a drowsy driver behind the wheel. Or the driver of a bus, with 50 to 60 passengers on board, fighting to stay awake at the wheel. All because they have been driving for weeks without proper rest.

It’s a very serious situation. It potentially puts many lives at risk.

But success is also down to the fact that the cases we bring to court are the most serious we encounter on the road.

We take a common sense approach to our job. We prefer to sit down and work with companies and drivers to teach them how to stay within the law.

But those that are very serious – like using devices to manipulate recording equipment on the bus or truck, or driving excessive hours without a break, and pose a real and clear danger to public safety – we prosecute.

The haulage and passenger transport industry is a very competitive business. With profit margins so tight, some cut corners and break the law in order to reduce their costs. Breaking the law becomes their competitive advantage. In doing so they put lives at risk. It’s also unfair to law-abiding truck and bus companies.

A tired professional driver is a public hazard. That’s why fines that can be imposed by the courts are hefty. An offence can attract a fine of up to €5,000 and/or six months imprisonment. In the vast majority of cases we are prosecuting a driver or employer for multiple offences.

So it was very worrying that relatively small fines, in one case €500, were imposed by the District Court recently in Kerry following proceedings against two Kerry-based coach operators for very serious breaches of the driving time and resting time rules.

In both cases the operators pleaded guilty to these and other serious offences.

We have prosecuted well over 1,000 cases since 2010. It is hugely concerning that we have had convictions where fines have been as low as €1.

In the majority of cases the average fine is about €600.

While the RSA has stated it fully accepts that it is a matter for the courts to set the sanction that apply in any particular case, we are concerned that low fines are of little or no consequence to the companies concerned and send the wrong signal to the industry.

It is hugely disappointing and demoralising for our transport officers and the gardaí who are working on the front line to save lives. It undermines the deterrent effect of our enforcement and the law.

Will it take a high-profile catastrophic incident with mass casualties for those courts that hand down such meaningless penalties to take the issue more seriously?

In our prosecutions, we try to make the courts aware not only of the road safety risks of these breaches, but also that these operators who are receiving minimal fines are undercutting honest and hardworking operators and driving down standards.

We cannot make our roads safer if some courts are handing out minimal fines.