Motorists caught at double the speed limit on ‘Slow Down Day’ 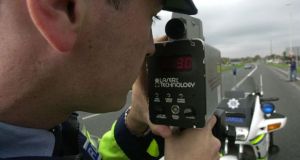 A Garda spokesman said the Garda Síochána and the Road Safety Authority would continue to remind drivers of the dangers of speeding.

Gardaí and GoSafe speed vans detected more then 900 speeding motorists, some of them travelling at almost twice the speed limit, as part of the National Slow Down Day campaign.

By Friday evening gardaí and GoSafe had checked the speed of more than 100,000 vehicles. Many vehicles breaking the limits were travelling at speeds of more than 120km/h, and some heavy goods vehicles were detected breaking the relevant limits while towing trailers .