Mother was mistakenly told her son had died in Limerick crash 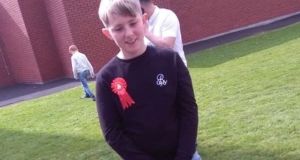 Jason Hogan, who is in an induced coma after a crash in Limerick. Photograph: Hogan family/GoFundMe

The family of a boy seriously injured in a crash in Limerick was initially told he had died in the incident, while another family was told that their son was alive when he had in fact been killed, it has emerged.

Jason Hogan, aged 12, from Thomondgate in Limerick, is still in an induced coma in Temple Street Children’s University Hospital in Dublin as doctors bid to reduce swelling on his brain and to treat burns on one side of his body following the midnight single-vehicle crash last week at Quinspool, Parteen, Co. Clare.

The crash, which claimed the lives of two men, 30-year-old Patrick Hogan, of Brown’s Quay, Thomondgate, and Jonathan Healy, aged 24, from Creagh Avenue, Kileely, saw the car in which they were travelling burst into flames after it struck a steel barrier before hitting a stone wall.

However, it has now emerged that, believing that they had the correct details, gardaí initially told Jason Hogan’s mother, Jillian Hogan, that the bodies of her son and her brother Patrick Hogan were lying in the burnt-out car.

The error came to light when members of the Healy family travelled to St James’s Hospital in Dublin to visit Jonathan Healy, only to discover that it was Jason Hogan who was lying in the hospital bed, not their loved one.

Jillian Hogan was utterly distraught when informed her son had died: “The poor girl was all over the place. She was told her child was dead and the next [thing] she was told he’s alive,” said a source close to the family.

A fourth man, named locally as Adam Carver, who was also injured in the collision, was being treated for injuries at University Hospital Limerick. Gardaí have refused to comment on the accidental misidentification, saying they do not comment on operational matters.

An online fundraiser, set up to help Jason Hogan’s mother meet expenses she has been incurring while continuing to maintain a vigil at her seriously ill son’s hospital bedside in Dublin, as well as looking after her three other children in Limerick, has raised nearly €5,000.

The administrator of the fund, Aisling Hogan, thanked all those who had “supported” the cause: “My plan was just to make as much as I could and to give her something each week to help her. The support of strangers and the people around the community is brilliant.

“Jillian has three younger kids and it’s not going to be easy for her. Jason is still in an induced coma, with 22 per cent burns at grade four. He’s holding his own, but he is still critical. Jason’s face is recognisable.

There were emotional scenes on Wednesday at Jonathan Healy’s funeral Mass at St Munchin’s Church, Limerick. Jonathan had “a great sense of humour”, and a great group of friends, a relative told mourners.