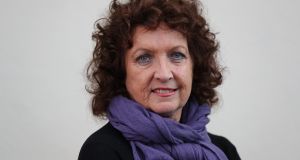 Kathleen Keyes: ‘I think there was something in me, calling me to speak, to speak from my own soul and just tell, express . . . a need to get out something from myself.’ Photograph: Nick Bradshaw/The Irish Times

A mother grieving the loss of all three of her children says she has been left “stunned and reeling” by a huge reaction around the country to her letter in the Irish Times over the weekend.

Kathleen Keyes (62) from Bray, Co Wicklow, said she penned the letter after marking the first anniversary of the death of her last surviving child Fergal, who died from complications of cystic fibrosis, just before Christmas last year.

It went viral online - in an overwhelming outpouring, it was described as heartbreaking, beautiful, humbling, comforting, thought-provoking, breath-taking and brutally moving - and was read by more than 80,000 people within a day of being published.

“I think there was something in me, calling me to speak, to speak from my own soul and just tell, express.. a need to get out something from myself,” Ms Keyes told The Irish Times.

“But also a need to let people know this story, make people aware of what they have in having their families around them. Particularly at this time of year - or any time of year.”

“They were just so wholesome, so lovely. They were extremely bright, highly intelligent. I think, having endured that suffering, it evolved them. But they were mad too. Witty.”

Gráinne, she said, contracted the bacteria burkholderia cenocepacia - which can be lethal for cystic fibrosis sufferers - when she was eight years old and it “sort of bled into the other two”.

“This is what eventually killed my three children,” Ms Keyes said.

Ms Keyes said she wasn’t given any advice by the Health Service Executive (HSE) to separate her own children to avoid it spreading.

“I am angry. I have a lot of anger there. Can you can imagine how awful that is to live with? I wouldn’t want you to. That on top of losing them, one by one.”

Gráinne had “a big head of curls, big blue eyes, was witty and funny.” She loved drama and won a part in the television series Ballykissangel.

“Darragh always had the house full of his friends, because he was at home a lot from school. He did videos, he has left a whole lot of videos, movies. He had a camera and was writing scripts.”

Fergal was a year and half younger than Gráinne and “it broke his heart when she died.”

“He was very into history and drama. He read avidly. If you were to walk into Fergal’s room you would see his whole ceiling covered in quotations.”

“He had a beautiful girlfriend (Becky) and they wanted to be together and have babies, but it didn’t happen for Fergal. They connected incredibly well, they were intellectually together. She is heartbroken. He was so bright and beautiful and so giving.”

Ms Keyes, originally from near Frenchpark, Co Roscommon and who moved to Bray 33 years ago, said she “couldn’t say” where she gets the strength from to keep going in her day to day life.

She tries to meditate and she writes.

“It’s just survival writing,” she said. “I am writing from a place within myself. The letter was just a personal letter. There were lots of other things coming out of it - I was aware of that - but I didn’t expect anything like this sweep of a response.”

Keyes completed a masters degree in poetry about a year ago and hopes to write a collection of poetry as well as memoir of her experiences.

“I have to do it,” she said, “I’m calling on myself to do it. But I can’t do it too soon, because of what I’m going through now.

“This is a huge transition for me. Up to now, I’ve been loving and been with my children, giving them intravenous antibiotics, attending hospitals. I’ve spent all my life doing this, and now my children are gone. There is an empty space around me.

“For the first time in more than 30 years, it is time to look at myself. Even up to today, I probably haven’t been able to grieve enough because my son died a year ago, my youngest boy died seven and half years ago and my girl died 18 years ago.

“In all of those years, I have just been chasing, chasing.

“Sometimes I feel like I’m cycling at the edge of the world now. I don’t know where I am. There is too much space around me now.”

Neurosarcoidosis - an inflamation on the brain. “The doctors think the stress and the years of going, going, going certainly have contributed to it.”

She hasn’t decided how she’ll spend Christmas this year. Last year, she got up on Christmas morning and cried. “I was in the sitting room and I visualised all the places where their toys would be down through the years.”

Then she went to the cemetery, lit candles and stayed there for hours. “I spoke with my children,” she said.

“Christmas is pretty insane for me. Because that blackness is around me, there is a conflict going on within me. When I watch all the consumerism, all the people on the shopping streets, and all the rush - for what?

“I would like them to slow down, take their time and ask themselves some personal questions about why they are filling the streets and overtaking one another to get the best buy and where is at all going? Where is the meaning? I want them to ask themselves the question: what are they doing right now and what is it about?”