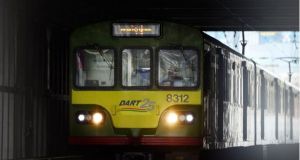 Irish Rail is to reduce the number of trains stopping at the town’s station from 12 to 9 between 6.00am and 9.30am on weekdays. File photograph: Bryan O’Brien/The Irish Times

The number of trains from Portmarnock into Dublin city centre during the early morning rush hour will be reduced from later this week prompting anger among local commuters.

Under the changes, Irish Rail is to reduce the number of trains stopping at the coastal town’s station from 12 to 9, between 6.00am and 9.30am on weekdays.

It has also confirmed that most mainline trains which used to stop in Portmarnock will no longer do so from September 9th.

The schedule changes have prompted anger among consumers who took to social media to criticise Irish Rail.

“Terrible service for people in Portmarnock darts every 20 minutes and no commuters,” said Dave Monaghan. “Effectively you just halved the number of trains serving Portmarnock and Clongriffin on an already over-crowded service.”

Anne Holland said it was “clear that peak time is where service is required. You can’t park after 8.15am in Portmarnock is evidence enough. You need to delay implementation,” she said and called for a “rethink” of the plans

While Irish Rail acknowledged that there would be a reduction in services for area, it said there would be an increase in the number of trains leaving from Malahide which would be of some benefit to people living in the area. It has also committed to revisiting the schedule changes in the months ahead.

Among the other changes to the timetable, the frequency of some Dart services will improve to every 10 minutes from once every 15 minutes in both directions on weekdays between Bray and Howth Junction, and then alternating between Howth and Malahide. Greystones frequency will remain every 30 minutes.