More than 30,000 passport applications to be processed 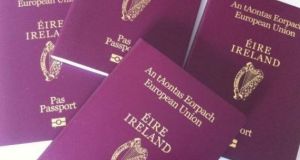 Tens of thousands of passports would normally be processed each month in the run-up to the summer.

There are more than 30,000 passport applications waiting to be processed by officials working within the Department of Foreign Affairs but the Passport Service has expressed confidence the backlog will be cleared within weeks.

The service processed 12,000 passports last week alone and while there are still 32,000 applications in the system, a spokeswoman said most of them would be issued by early next month.

The passport office drastically curtailed its normal services from the middle of March as hundreds of its staff were diverted to work in other departments including Covid-19 contact tracing within the HSE and manning information lines for the Department of Social Protection.

It did not, however, completely stop issuing passports and, alongside emergency travel documents which had to be issued, the office also processed thousands of adult renewal applications received online which required minimum staff intervention.

“Once the potential impact of Covid-19 became obvious, contingency planning commenced to minimise the impact of restrictions on the delivery of passport services,” a spokeswoman for the Passport Service said.

“In particular, plans were put in place to ensure that the Passport Service continued to provide an emergency service for the issuance of passports in cases of serious illness or death abroad.”

She said that while staff were on-site processing urgent applications, they had also produced about 6,000 additional passports.

However, tens of thousands of passports would normally be processed each month in the run-up to the summer, and the lockdown and the diversion of resources to other areas has led to the significant backlog.

The spokeswoman said it was “at an advanced stage of planning for the return to full operation” and she said that in phase two of the Government plans which started last Monday, the processing of non-essential online applications started to ramp up.

“There are currently 32,000 passport applications in the system to be processed,” she said.

“The Passport Service has a great deal of experience in dealing with peaks in demand and we believe that we are well placed to ensure the online service will be meeting its usual turnaround times of approximately two weeks for simple applications by phase three” which is now set to start at the end of this month.