More than 1,000 drivers caught speeding on National Slow Down Day 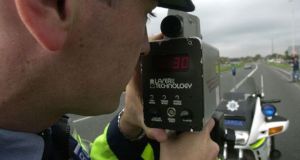 An Garda Síochána thanked the 124,929 drivers who were found to be compliant and drove within the speed limits.

By the time National Slow Day came to an end early on Saturday morning more than 1,000 cars had been clocked going faster than they should have been with some travelling at over twice the speed limit.

The most egregious speeding breach of the campaign was recorded on the R132 near Mell in Co Louth where a vehicle was clocked at 125km per hour in a 60km per hour zone.

Gardaí and GoSafe speed vans detected a total of 1,072 speeding drivers as part of the National Slow Down Day campaign held over a 24 hour period starting at 7am on Friday.

Many of the vehicles breaking the limits were travelling at speeds of over 120km per hour with some heavy goods vehicles detected breaking the relevant limits while towing trailers.

“We would like to thank the 124,929 drivers who were found to be compliant and drove within the speed limits,” said chief superintendent Paul Cleary, of the Roads Policing Bureau.

“While the vast majority of motorists were found to be travelling safely and well within the speed limits, there are still those who continue to drive at excessive and inappropriate speeds,” he continued.

He warned that the Garda would “continue to focus our enforcement activities on non-compliant motorists as we strive to reduce the number of fatal and serious injury collisions across our roads network”.

Independents offered Healy-Rae style deal to support coalition 02:08
Pete Taylor takes personal injury case over Bray gym shooting 02:00
Strict rules on queuing as Dublin shops prepare to reopen 02:00
President expresses ‘greatest heartbreak’ at clashes with protesters in US 01:19
How to get one dance step ahead of Covid-19 01:00

1 Tyrone midwife on the cover of Vogue magazine
2 Barack Obama urges those protesting in US to seize the momentum
3 Luke ‘Ming’ Flanagan bares his bottom half to European Parliament
4 With Lincoln looking on, the crowd dropped to their knees as 7pm approached
5 Covid-19: Varadkar downplays expectation of accelerated lifting of restrictions
Real news has value SUBSCRIBE