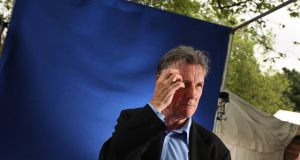 Michael Palin will talk about his new book Erebus: The Story of a Ship. Photograph: Jeremy Sutton-Hibbert/Getty Images

Writer and broadcaster Michael Palin will be among the participants in the Dublin Festival of History this autumn.

The former Monty Python star has forged a career for himself as an author and historian in recent years.

He will talk about his new book Erebus: The Story of a Ship, which will be published in September. The vessel was abandoned in 1848 during the ill-fated John Franklin expedition to find the Northwest Passage.

The ship was discovered on the seabed at Queen Maud Gulf in Canada in 2014.

Palin will be in conversation with former Irish Times journalist Ed O’Loughlin, whose acclaimed novel Minds of Winter was partially inspired by the story of the Erebus. The talk takes place on Saturday, October 7th, at 7pm.

Renowned historian Anne Applebaum will speak about the famine in Ukraine precipitated by Stalin’s policies of forced collectivisation.

The authors of the bestselling Atlas of the Irish Revolution - Donal O Drisceoil, Helene O’Keeffe and John Borgonovo - will reflect on the book that won the overall title at the 2017 Irish Book Awards and has been reprinted several times.

Prof Richard Grayson will talk about his new book, Dublin’s Great Wars: The First World War, the Easter Rising and the Irish Revolution, at 11am on Saturday morning, October 7th. The book knits together the story of the tens of thousands of Dubliners who fought on different sides in those tumultuous years.

The Dublin Festival of History, which takes place between September 24th and October 7th, will feature more than 140 events, with talks, walks, tours and exhibitions on a range of topics, including the historical impact of gaming, former slave and abolitionist Frederick Douglass’s time in Ireland, a queer history of Kilmainham Gaol, an evening of conversation and music with Christy Dignam, as well as events marking 100 years of Irish women’s suffrage.

Dublin City librarian Brendan Teeling said the festival has been growing year-on-year since 2013 and it was “immensely proud” that it had a majority of female speakers this year.

“History isn’t just for academics - whether you have an interest in fashion, gaming, GAA, maps or want to know more about the first wave of Irish feminism - we’ll have an event for you. We’d encourage everyone to check out our programme, come along to an event and learn something new,” he said.

As part of the Dublin Festival of History, Ronan McGreevy will discuss The Lemass Tapes on October 2nd at 1pm in The Irish Times Building, Tara Street. Also participating will be Natasha Ryan, the granddaughter of Dermot Ryan, the man who carried out interviews with the former taoiseach in the late 1960s. Extracts from the tapes were published in The Irish Times in June. Booking is required on Eventbrite.