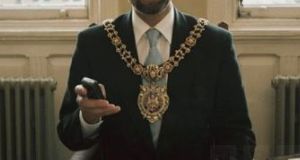 If electorates in Dublin and cork approve the change, the first directly elected mayors will not take up their new positions until 2024. File photograph: Getty Images

Dublin and Cork will not have their first directly elected mayors for at least six years, the Minister for Housing and Local Government has confirmed.

The Minister, Eoghan Murphy, told the Dáil the plebiscite asking voters in the two cities whether they want an executive mayor is now likely to take place in June 2019, to coincide with the local elections that year.

This will essentially mean that if the electorates in both regions approve the change, the first directly elected mayors will not take up their new positions until 2024, five years later, at the earliest. That will coincide with the next round of local elections with which it is assumed the mayoral elections will coincide.

The change was presented as a huge setback by Green Party leader Eamon Ryan, who said the concept of a mayor for all of Dublin, and one for Cork, was being put “on the never-never” and was being long-fingered indefinitely.

“This is a huge let-down. This is a critical time for our capital city, with huge crises in housing and transport. To think the mayoral election is being pushed back another five years is just galling,” he said.

The Green Party leader, Fianna Fáil’s Dublin spokesman John Lahart and Labour Senator Kevin Humphreys have all campaigned for an election. The idea has attracted cross-party support and has been a target on programmes for government since 2011.

The confirmation yesterday reflects a change in Government policy on this matter. In the autumn, the Cabinet was briefed on a timetable of possible polls and referendums that might be held during 2018. The plebiscite for directly elected mayors was provisionally pencilled in for October this year. That would allow the possibility of mayoral elections in June 2019.

A plebiscite, unlike a referendum, does not compel a government to follow its result, although in practice it is used as an indicator as to whether or not the public approved of a measure. The last such plebiscite was held in the Dingle area over the change in the town’s official title to its Irish form, An Daingean.

A report commissioned by the Minister of State in the Department, John Paul Phelan, is believed to have concluded the current situation had left both cities at a competitive disadvantage to similarly sized cities in Britain and Europe, in terms of strategic planning, transport, tourism and attracting foreign business.

Dublin County has four separate mayors, each being year-long honorary positions. Similarly, the role of Cork’s mayor is also largely ceremonial and lasts for a year.

The plan for both cities will be based around an enlarged metropolitan area for which the mayor has responsibility. In Dublin it will include all four local authorities, as well as the parts of Counties Kildare, Meath and Wicklow in the commuter belt.

One of the recommendations is that each mayor will have his or her own cabinet, with its members elected on a list system.