Residents object to development on Magdalene site in Cork 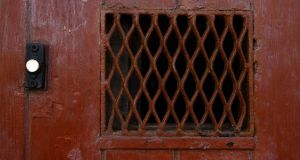 A grid in the door of the Magdalene laundry on Gloucester Street in Dublin. Photograph: Cyril Byrne

Residents on Cork’s northside have lodged more than 30 objections against the proposed building of 182 apartments on the site of a former Magdalene laundry in the city.

People who live close to the Good Shepherd convent insist that the area will not be able to cope with an influx of hundreds of additional residents as traffic congestion is already at a peak.

Tom Coleman, spokesman for the Good Shepherd Community Action Group, said the area does not have the infrastructure to support the building of 182 apartments on the eight acre site which is located between Sunday’s Well and Blarney Street.

“It will create gridlock. We have nothing against development in general. But we will be choked completely,” said Mr Coleman. “This will double the population. There was scant regard for the architecture of the area and there is concern about the burial of the infants. Feelings are running very high in the area.”

The residents have issued an appeal to An Bord Pleanála to hold an oral hearing in to the proposed building of apartments on the site.

The Good Shepherd convent was first bought by UCC in 1995.

It was subsequently sold on to developer Pat Hegarty, who resold it to Frinailla seven years ago with a price tag of €20 million.

It was purchased by current owners Dundalk based Moneda Development in 2016 for €1.5 million.

In December of last year, Moneda were granted planning permission by Cork City Council with the provision that the number of apartments be reduced from 234 to 182. The company also had to make a number of changes to their plans in the interest of the area’s visual and residential amenities.

The planning is also subject to conditions relating to the potential finding of undocumented burials on the site.

Cork City Council has noted that the site is of “significant social, architectural and conservation importance and sensitivity.”

The Magdalene grave at the site contains the names of 30 women who died between 1882 and 1973. The grave was unmarked until the late 1990s.

The central convent block and Magdalene asylum wing opened in 1872. The complex remained in use until the late 1970s.