While Ryanair can break up with you, they are banking on you not breaking with them 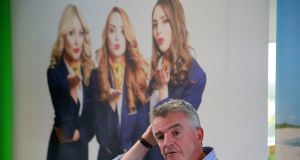 Sitting under an “Always Getting Better” banner, O’Leary explained how things had got a whole lot worse both for his airline and for many of its passengers in recent days. Photograph: Nick Bradshaw

On Monday afternoon, Michael O’Leary did exactly what he had to do to contain the damage done to Ryanair since it started cancelling flights and throwing the travel plans of tens of thousands of its passengers into disarray last Friday.

As passenger anger mounted and a cloud of uncertainty hung over the plans of millions of its customers scheduled to fly with the airline between now and the end of October, he came out, held up his hands, and – with a mixture of typically brash humour and a less typical act of contrition – he took compete responsibility for the cock-up.

Sitting under an “Always Getting Better” banner, O’Leary explained how things had got a whole lot worse both for his airline and for many of its passengers in recent days.

“What we have messed up is the allocation of holidays and trying to overallocate holidays during September and October, while we’re still running most of the summer schedule, and taking flight delays because of principally air traffic control and weather disruptions,” he told a large gathering of reporters summoned to the company’s shiny new headquarters close to Dublin Airport.

He accepted that it was not just people whose flights had been cancelled who were affected, and agreed that all 18 million people who had seats booked on the airline between now and the end of October were sent into a tailspin of uncertainty by how the cancellation programme was announced.

And then, he did what Ryanair should have done from the very start, and published a full list of the cancellations coming down the runway and said the airline would adopt a “no quibble” policy when it came to processing the compensation claims allowed for under EU legislation.

He accepted that reputational damage had been done to the airline because of the way it had “messed up” and stressed over and over again that, in cancelling the flights, Ryanair was acting in the greater good.

His message was that by cancelling the flights of 350,000 people over the next six weeks, Ryanair was ensuring that a further nine million people would not be hit with delays.

That message was key to his performance and O’Leary repeatedly referenced the 2 per cent and stressed that 75 per cent of them would be on flights the same day as their cancelled ones, and that, within six weeks, the airline would have everything back on track.

“This is our mess-up,” he said. “When we make a mess in Ryanair we come out with our hands up. We try to explain why we’ve made the mess and we will pay compensation to those passengers who are entitled to compensation, which will be those flights that are cancelled over the next two weeks.”

He accepted that if any organisation that Ryanair does business with had “made a mess” on this scale, he would not have been found wanting in calling for heads to roll, but said that no heads would roll at Ryanair.

When asked directly if he would fall on his sword, he was sure in his answer: “I don’t think my head should roll – I need to stay here and fix this.”

But O’Leary would not be O’Leary if he did not use any platform he has to take a pop at those who displease him. Pilots who leave the airline were caught in his crosshairs – although he insisted the numbers were small – while other airlines came in for flack too.

He denied the mess it had made of the cancellations was the biggest “cock-up” of his more than a quarter of a century at the helm and said he did not expect to lose much business as a result .

“The reality is when you’re flying with somebody else you are paying far more money for the privilege, and you will have to put up with more delays.”

And that bottom line is – as ever – what the airline is banking on.