Metro Hotel fire: ‘Everyone lost their homes but... we lost everything’ 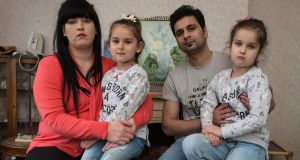 Adeel Bashir with Anita Doktere and their children, Javeria and Saira. Anita is worrying about how to feed her daughters. Photograph: Dave Meehan

At a house in north Dublin, friends of Adeel Bashir, his partner Anita Doktere and their two young daughters cook them dinner, away from their home which was destroyed in Dublin’s Metro Hotel fire.

It is a small comfort for a young family whose normal routines disappeared overnight.

The girls, Javeria (7) and Saira (5), know they have lost everything. “That’s what they keep saying,” says Adeel. “Their dolls are dead.”

It will be months before the apartments at the Ballymun complex, a mix of private homes and hotel rooms, are habitable again. The building’s 13th and 10th floors were engulfed in flames last Wednesday night.

At a meeting yesterday afternoon, Adeel says, all of the residents were told to find somewhere else to live – no small undertaking in a barren rental market.

For now, Adeel and his family are being accommodated at a nearby hotel. For how long, they do not know.

Chief among the family’s concerns is being told that insurance will not cover their personal property and there will be no compensation.

“I asked him [the landlord] should we get something because we have lost everything,” says Adeel.

“I understand that everyone lost their homes but [those on] the 10th floor, the 13th floor, we lost everything.”

Their laptops, passports, jewellery, the children’s tablets and other valuables were all destroyed.

They had big piggy banks and they were going to open them on holiday. They were so excited

“I had my mother’s pictures, letters. I can’t get them anymore. She is not there anymore,” he says.

Anita mentions her own childhood photographs: “I can’t bring them back.”

All of the tenants have been told they will have their deposits returned next week and will be put in temporary hotel accommodation.

Anita says that unlike other residents at the meeting they have no family to go to.

Adeel is employed as a security guard but is overwhelmed at the prospect of having to replace everything so quickly. He flicks through a smashed phone, a spare he had, and talks about how his girls’ school, the Virgin Mary national school in Ballymun, was the only source of support with offers of clothes from other parents.

In the hotel, Anita worries about how to feed her daughters. Adeel lists the prices they have paid for meals in just two days, even skipping breakfast. The girls don’t like takeaway food.

They had lived at the Metro for more than three years, describing it as a happy home – a two-bedroom apartment with “exciting” panoramic views of aircraft landing in Dublin Airport to the north and Bull Island to the east.

Along with everything they have lost is a family holiday to Barcelona next month, paid for but now unlikely to happen.

“The girls were saving so much money,” Anita says. “They had big piggy banks and they were going to open them on holiday. They were so excited.”