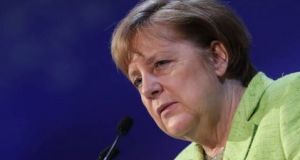 Angela Merkel: “She really wants to listen, to show support and to listen, and to find out what is the current situation, what is the view of Ireland, and how can we proceed in different scenarios”

Angela Merkel is visiting Dublin for the first time in five years to show solidarity with Ireland and to get a “clearer picture” of Irish preparations for a no-deal Brexit, the German ambassador to Ireland has said.

Deike Potzel told The Irish Times that Chancellor Merkel would meet Taoiseach Leo Varadkar to “get a clearer picture” on various Brexit issues, as well as other EU matters.

Mrs Potzel stressed that Dr Merkel’s visit, the first time she has held bilateral talks in Dublin with a Taoiseach since meeting with Enda Kenny in March 2014, is a show of solidarity with Ireland.

That visit coincided with that year’s congress in Dublin of the European People’s Party, the centre-right European grouping to which Fine Gael and Dr Merkel’s CDU belong.

The Government has rejected suggestions that Mr Varadkar’s two bilateral meetings this week – with French president Emmanuel Macron in Paris on Tuesday and with Dr Merkel in Dublin on Thursday – mean Ireland is coming under pressure to outline how it will deal with the Border in a no-deal Brexit scenario.

Other sources, however, said there was “curiosity” about Dublin’s proposals to deal with the Border, but said the fact that Dr Merkel was coming to Dublin was a show of support and was not a warning to Mr Varadkar – which would not have to be delivered in person.

“She really wants to listen, to show support and to listen, and to find out what is the current situation, what is the view of Ireland, and how can we proceed in different scenarios,” Mrs Potzel said.

“The German government has always been in support of the Irish on the whole Brexit issue, and that we have been in 100 per cent solidarity with Ireland, especially on the Border issue and the backstop.

She expected this would include all preparations for a no-deal scenario, including with regards to the Border. She said she understood that methods of avoiding physical checks away from the Border were being discussed at present.

“I think that is really up to the experts to say. And they, as I take it, are looking into that. I am not an expert on these issues.

“We have always said, and the chancellor has always said, that we will try everything to try and prevent a no-deal.”