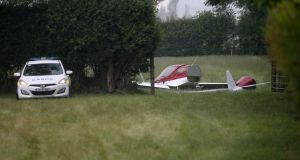 The scene of a light aircraft crash in Belan, Co Kildare. Photograph: The Irish Times

Two men killed in a light aircraft crash in Co Kildare were highly accomplished pilots on a leisurely flight together, close friends have said.

Jim Price, from Ballinteer in south Dublin and Aidan Rowsome, originally from Stilloran but who lived in Kildare town, died after the plane they were travelling in crashed into a field at Belan, southwest of Moone, on Thursday. Mr Price was aged in his 70s while Mr Rowsome was in his 50s. Both were married with children.

Mr Rowsome had recently bought the BRM Aero Bristell NG5 aircraft, which they were flying out of Kilrush Airfield, with three other enthusiasts.

Michael Traynor, a friend of Mr Price for the last 30 years, described him as a highly experienced instructor involved in several clubs operating out of Weston Airport for decades.

“We spoke on the phone almost daily,” he said.

“Jim looked forward to every flight he went on. He loved every aspect of flying: as a passenger, as an instructor, as a pilot.

“I was at the crash site all day yesterday. I am shattered. It is devastating. There is nobody could say a negative word about him.”

Mr Price was a recently retired “career engineer” with Aer Lingus, where he was highly regarded by other engineers and also Aer Lingus pilots, said Mr Traynor, himself an aviation enthusiast.

“The aviation community in Dublin is small and tight and Jim was extremely popular – professional and popular,” he said.

“He was a very affable and very friendly guy, up for a good laugh and very easy to relate to.

“Jim and Aidan were just two friends going for a leisurely flight.”

Mark Appleby, a close friend of Mr Rowsome for years, said he last spoke with him on the day of the fatal flight.

“He was lovely fella. I flew a lot with him. All I can say is that he was always correct, did everything right in the plane.”

Mr Appleby said he was “completely nonplussed” as to what happened.

“I’m still stunned – it is the only word I can use – and I will be for a long, long time,” he said. “All I can say is Aidan was a gentleman to his fingertips.”

Mr Price is survived by his wife Denise, son Alan and daughters Joanne and Aoife. His funeral will take place on Tuesday morning at 11.30am in St John the Evangelist Church, Ballinteer followed by burial in Bohernabreena Cemetery.

Mr Rowsome, who was vice president of SmartDrive Systems for Europe, Middle East and Africa, is survived by his wife Marie and daughter Nadia. His funeral will also take place on Tuesday at the Church of St Laurence O’Toole, Stillorgan, arriving at 9.45am for 10am Mass with burial afterwards at Shanganagh Cemetery, Shankill.