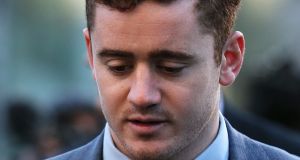 Paddy Whiskey is reviewing its partnership with London Irish rugby club, according to a Facebook page claiming to be the brand’s official presence on the social network.

In response to a question posed by a user about the signing by the London club of former Irish international Paddy Jackson, the page, called Paddy Irish Whiskey Ireland, stated that “we have no input into team selection or signings, but we will be reviewing our partnership with London Irish in the coming weeks.

“We have shared your concerns with London Irish as a matter of urgency,” it said in response to the user, who had shared an image of Paddy Jackson next to a bottle of the whiskey, juxtaposed with messages taken from a WhatsApp group that were published in the course of Mr Jackson’s rape trial last year.

He was acquitted on all counts, alongside three other men, some of whom were facing less serious charges arising from the incident.

The Facebook page is not verified by the platform as an official social media property of the whiskey brand, which is owned by American spirits company Sazerac. However, since it was established last year, the page has consistently shared promotional content for Paddy Whiskey, including videos shot at official Paddy events, cocktail recipes and competitions for tickets to company-sponsored events. Several articles about Paddy promotional activities by third parties include links to the Facebook page.

In January it posted about Paddy becoming “the official whiskey of the London Irish Rugby Club” with a picture of two of the club’s players holding the whiskey, a post that was “liked” by the marketing manager for the Irish subsidiary of Sazerac.

Sazerac, its Irish subsidiary Hi-Spirits and London Irish all refused to answer detailed questions about any review of the sponsorship, or the official ownership of the page.

London Irish has said that it is in dialogue with all its sponsors after Diageo, the makers of Guinness, cancelled its contract with the club in the wake of its decision to sign Mr Jackson, who had his contracts with Ulster Rugby and the Irish Rugby Football Union cancelled in the wake of the trial last year. Another Ulster player, utility back Stuart Olding, was also accused and acquitted of rape, and had his contract cancelled.

In a statement on Thursday, Diageo said the decision to sign Mr Jackson “is not consistent with our values and so we have ended our sponsorship”. Another sponsor, Cash Converters, announced on Twitter in recent weeks that it was ending its relationship with the club. London Irish have said that the signing of Mr Jackson was not the reason the company parted ways with the rugby club.

Several other sponsors of London Irish did not respond to requests for comment on the matter. On Friday it was still possible for companies to bid on individual corporate sponsorships for Mr Jackson on the London Irish website. The club said it was “understandably disappointed” with Diageo’s decision “and particularly the manner in which the company has chosen to do so”.