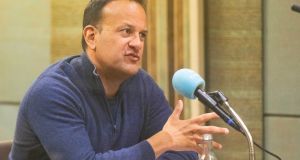 Leo Varadkar said he was awaiting a report from barrister, David Kennedy SC, who was asked to “establish all the facts” around Maria Bailey’s now withdrawn action against the Dean Hotel in Dublin. Photograph: Kinlan Photography.

Leo Varadkar is ordering all future Fine Gael election candidates to fully disclose their involvement in any legal proceedings in the wake of the Maria Bailey compensation claim controversy.

Personal liability actions and other court cases could no longer be treated as private matters for party members because of their impact on others standing in the polls, the Taoiseach said.

Mr Varadkar said it was impossible to quantify the full impact of Ms Bailey’s swing case claim on Fine Gael’s performance in the recent elections, but that “it was not a positive effect certainly”.

“I have a political party with 300 elected representatives: TDs, Senators, councillors, MEPs. They are all individuals, it is not an army and they often do these things without recourse to party or with the agreement of the party,” he said.

“One of the things we are going to change, and this is our party pledge, is we are going to make it a requirement now for all candidates to make us aware of previous convictions or court cases they may be getting involved in.

“We can’t just treat these things as private matters anymore because they do have an impact on the rest of the party, many of whom shouldn’t bear the consequences of this.”

Fine Gael has appointed a barrister, David Kennedy SC, to “establish all the facts” around Ms Bailey’s now withdrawn action against the Dean Hotel in Dublin, where she alleged she had suffered injuries after falling from a swing in the hotel bar in July 2015.

She later said she had a bottle of beer in her hand while she was on the swing and was reaching for a friend’s bottle of wine.

Mr Varadkar said he hadn’t yet seen Mr Kennedy’s report, but Ms Bailey would be the first to see it and comment on it as part of due process.

On recent revelations that Fine Gael TD Alan Farrell brought a personal injuries claim for up to €15,000 against Hertz Rent-A-Car after being involved in a collision with one of its vehicles, Mr Varadkar said there would be no internal party report into that matter.

“It is a somewhat different one,” he said.

“He was rear-ended. The other driver accepted liability, the case was heard and there was a very modest settlement in his favour.”

The judge awarded Mr Farrell €2,500 for his injuries and said there was “little or no notation to back up a claim of significant whiplash”.

Mr Varadkar admitted the compensation cases did not reflect well on the senior government party and its efforts to tackle Ireland’s compensation culture, and its impact on high insurance premiums.

“It doesn’t [look good] and that is something I have to deal with,” he told The Marian Finucane Show, presented by Brendan O’Connor, on RTÉ Radio 1 on Saturday morning.

The Fine Gael party leader said some progress had been made on bringing down motor insurance and freezing health insurance rises but “the one we have a real difficulty with now is public liability insurance for business people.”

“They are not happy about this at all as you can imagine.”

Mr Varadkar said the Government was involved in “pretty robust engagement” with the insurance industry over spiralling premiums.

“They want a quantum change so the judiciary brings down the volume of claims,” he said. “We are saying to them we will only do those sort of things if you give us an assurance that you will actually reduce the premiums. We are not going to do it so they can make bigger profits.”

The Taoiseach said insurers had been warned that “Ireland isn’t Treasure Island”.

On the local elections, Mr Varadkar said a lot of votes in Dublin that might have gone to his party went to the Greens instead, while voters turning their back on the “far left” as the economy rebounded were turning to Fianna Fáil rather than Fine Gael.

“We didn’t see that coming,” he said.

“There is an issue in that for us . . . them going to Fianna Fáil rather than us is something we need to analyse.”

£1,000 pay rise for NI politicians a ‘slap in the face’ for workers 15:28
Man charged with baby’s murder left him alone to visit casino, court told 15:23
Son who kicked father to death was ‘provoked’ by a ‘controlling’ father – court 15:18
Lack of resources will leave gardaí ‘without armed backup’, says GRA 15:06
Taoiseach claims Sinn Féin not ‘a normal political party’ 15:03
SUBSCRIBER ONLY