Memorial unveiled to the Irish who died at Passchendaele

Nearly 5,000 Irishmen died at the Battle of Passchendaele. Among them were 1,200 men who were killed on one terrible day in August 1917. Video Enda O’Dowd/Ronan McGreevy 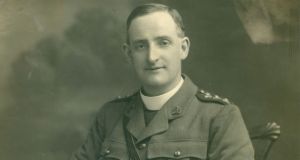 A new memorial to the Irish who fought at Passchendaele and to the Jesuit priest and army chaplain Fr Willie Doyle SJ has been unveiled.

UK ambassador to Belgium Alison Rose and the Irish representative to Nato based in Belgium were among the attendees.

An ornamental signpost showing the way to the four provinces of Ireland, Dublin, Belfast and Tipperary has been erected in the village of Frezenberg outside Ypres in Belgium.

The signpost is the third of three. The others commemorate the Scottish and Welsh involvement at Passchendaele.

At the same time a blue plaque was unveiled in memory of Fr Doyle who went missing in action on August 16th, 1917 during a phase of the Battle of Passchendaele known as the Battle of Langemarck.

The two new memorials are on the site where a third, in memory of the Irish who died at Passchendaele, was unveiled last year.

The blue plaque, only the second on the Flanders battlefield, is near where Fr Doyle was killed by a shell. It remembers “Father Willie Doyle, MC, Army Chaplain, 8th Bn Royal Dublin Fusiliers Born Dalkey, Dublin, Ireland 3 March 1873 Missing during the Battle of Langemarck near Potsdam Farm on 16 August 1917”.

The blue plaque coincides with a new documentary about Fr Doyle entitled Bravery Under Fire which has already been broadcast this week in the United States and Ireland on the Catholic channel EWTN. It will be repeated on the channel at 9am on August 16th, 1917, the 101st anniversary of his death.

The signpost and plaque have been organised by Erwin Ureel, a former Belgian army officer, who has been involved for several years in remembering the Irish who died in Flanders during the first World War.

He was responsible for a memorial unveiled last year to the 1,200 men of the 16th (Irish) Division and the 36th (Ulster) Division who were killed on one day during the Battle of Passchendaele.

The monument is on the boundary between where the two divisions went over the top on August 16th, 1917. It is made of Welsh blue pennant stone.

It was the second and last time the two divisions fought together, the first was at Messines Ridge in June 1917.

The memorial has a bronze plaque attached to it designed by the sculptor Willie Malone. His grandfather was killed in Flanders in 1915.

Ronan McGreevy will exhibit The Irish Times film United Ireland: how Nationalists and Unionists Fought Together in Flanders at the West Cork Film Festival on Sunday afternoon at 1.30pm.