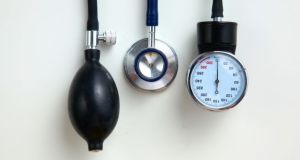 The State Claims Agency last week said it had paid out €208 million in damages to plaintiffs in relation to medical negligence cases since the start of the year. Photograph: iStock

Doctors have called on the Government to reform the system for resolving medical negligence cases as it emerged more than €265 million has been paid out by the State Claims Agency in damages and costs in the first nine months of the year.

Informed sources said expenditure in dealing with negligence cases so far in 2019 had been increased by a small number of large cerebral palsy-related payments in the first half of the year.

The State Claims Agency last week said it had paid out €208 million in damages to plaintiffs in relation to medical negligence cases since the start of the year.

In addition, legal fees of more than €50 million were paid. More than €36 million was paid to lawyers acting on behalf of plaintiffs and a further €16.4 million to the State Claims Agency’s own legal representatives.

Expert witnesses cost more than €4.6 million in the first nine months of the year, according to the figures produced by the State Claims Agency.

The total amount of €265.984 million paid out by the State Claims Agency in relation to clinical care in the first nine months of this year is just slightly less than the €268.45 million paid out over the full course of last year. This in itself represented an increase of €18.6 million – or 7.5 per cent – on the €249.77 million paid out in 2017.

The Irish Medical Organisation (IMO), which held a major conference on negligence at the weekend, said the current system “did not not serve the interests of patients, healthcare professionals or the State”.

It urged the Government to introduce major reforms to the current arrangements.

Obstetrician Dr Rhona Mahony, executive director of the Women and Children’s clinical academic directorate within the Ireland East Healthcare Group, said the overall estimated liability for medical negligence was now about €2.33 billion. She said this figure had increased steadily over the past decade but particularly in the last five years. She said the current trajectory was “unsustainable”.

Dr Mahony told the conference three-quarters of this liability was accounted for by maternity claims “reflecting the high quantum of settlement in claims relating to adverse neurological injury and cerebral palsy”.

“Some adverse events are not negligent and the practice of medicine is a human endeavour and humans make errors. We do need improve our communication in the context of adverse events,” she said.

“Open disclosure should be a given. Patients need honest, informative and empathetic communication and a range of innovative training opportunities have been developed to address this very important aspect of care. But when things go wrong patients need appropriate care, and that should be the primary objective of our system. Patients should not have to rely on lengthy traumatic medical negligence processes to obtain sufficient funding for care.

“While it is appropriate that compensation should be paid when harm is done, the primary objective must be appropriate clinical care.”

IMO president Dr Padraig McGarry urged the Government to look at a different model and alternative approaches as this could “be helpful in changing the adversarial approach currently in situ which benefits very few and is stressful to both patient and doctor alike”.

“For many patients, lengthy, stressful and expensive court proceedings are often the only recourse available to them and this is far from an ideal situation. Only in the very rarest of events is harm caused by anything other than systems failure or unintentional human error and that a different approach was needed.”

Dr McGarry said fear of litigation was a major barrier to open disclosure with negative consequences on the doctor-patient relationship.

“It also impedes the learning process with regards to patient safety and improving patient outcomes. It is vital that we get open disclosure and tort reform right.”