Ceremony honours Irish who ‘volunteered to oppose Nazism in arms’ 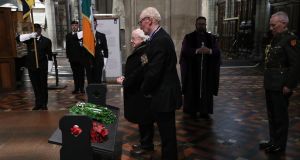 The Irish who served in the Allied forces in the second World War were recognised at the annual Remembrance Sunday service at St Patrick’s Cathedral in Dublin.

In his sermon, Canon David Oxley, the prebendary of St Audoen’s, said Irish neutrality in the second World War was understandable from a political point of view.

However, he added that from a moral point of view “it was hardly possible to remain neutral in the face of the kind of evil represented by fascism.

“Many individual Irish men and women did in fact take sides and volunteered to oppose Nazism in arms, and we commemorate their sacrifice this afternoon. And I suppose what I want to say to you is just this: in the conflict between right and wrong, truth and falsehood, neutrality is not an option.”

Canon Oxley criticised the “cynical disregard of truth, the deliberate manipulation of information, the poisoning of the well of knowledge” in contemporary society.

“Social media and computerised wizardry may make this easier to do, but the motivation to deceive comes from within the darker corners of the human heart, where greed, lust and hatred festered.”

Mr Higgins laid a wreath at the north transept of the cathedral along with Lieut Col Ken Martin, the president of the Royal British Legion (Republic of Ireland) branch.

Among those present at the service were Minister for Justice Charlie Flanagan, the chief of staff of Ireland’s Defence Forces and Garda Commissioner Drew Harris.

Services to mark Armistice Day were also held in the Church of Ireland’s St Fin Barre’s Cathedral in Cork and at the cenotaph in the South Mall. Representatives from the French and Belgian governments attended a service of remembrance at St Nicholas Collegiate Church in Galway city.

In Kilkenny, an ecumenical commemoration took place at the new memorial in the city to all the men from the county who served in the first World War.

A wreath was laid by the family of Thomas Woodgate who has been confirmed as one of the youngest combat fatalities of the first World War. He was 14 when he drowned on board the RMS Leinster in October 1918.

In Tubbercurry, Co Sligo, the official launch took place of the campaign to mark the centenary next year of the Connaught Rangers mutiny. One Ranger, Pte James Daly, was executed, three others died and dozens were jailed following the mutiny which took place in India in June 1920 in protest at the actions of the British army in Ireland.

Plans were unveiled to erect a plaque in the town next year to four men from Sligo who were involved in the mutiny. Mary Henry, the granddaughter of mutineer James Gorman, described the mutineers as the “forgotten heroes of Irish history”.